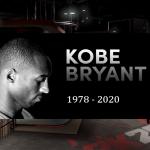 We’re at midcourt, and the ball is about to go up…it’s Monday Tip-Off! Start your week here at the NLSC with a feature that’s dedicated to opinions, commentary, and other fun stuff related to NBA Live, NBA 2K, and other basketball video games. This week, I’m tipping things off with a tribute to the late and legendary Kobe Bryant.

Depending on where you are in the world, the week was ending or just getting started when you heard the tragic news that Kobe Bryant had been killed in a helicopter crash in California. Following unfounded rumours and speculation, we eventually learned that his daughter Gianna, and seven other people, also lost their lives in the accident. It’s been difficult to process the news. Words like “surreal” feel so cliché at a time like this, but they’re nevertheless apt. Social media timelines and NBA broadcasts have been filled with grief and tributes since the terrible news broke.

I too feel compelled to pay tribute to Kobe Bryant, now that I’m past the initial shock. However, I will admit that I was hesitant to forego my planned column in favour of this one. I didn’t want it to be in poor taste, to come across as an opportunistic content creator who’s just trying to get clicks and attention by talking about a topical tragedy. Ultimately, I decided that I wouldn’t let cynicism deter me. Whether you cheered for him or against him, Kobe Bryant was one of the greatest players in league history, carving out a remarkable legacy in the real NBA and on the virtual hardwood alike. It’s only appropriate to pay tribute to him as we all mourn this awful turn of events.

Before I go on, I’d like to express my condolences to Kobe’s friends and family, who have suffered two unimaginable losses today. Also, while basketball fans and people everywhere are grieving the loss of an icon and his daughter, we can’t forget about the seven other people who lost their lives. My condolences go out to their friends and family as well. A majority of the attention will understandably be placed on the loss of the famous person, whose career inspired and impacted so many people, but it’s a tragic accident all around and we mourn all of those losses. May they all rest in peace, and may their friends and family find comfort in all the difficult days to come. With that being said…how do you sum up Kobe Bryant’s career? I’m sure there’ll be many wonderful tributes in the form of articles and video packages in the coming days and weeks, which we should all read and watch. For my part, I believe that wherever you rank him among the greats – and now is probably not the best time to renew that debate – he unquestionably ranks up there with the best of the best. His numbers, his records and achievements, the skill and talent he displayed on the court; there’s no denying his greatness, his drive, the fabled “Mamba Mentality”. Like all of the greats, he inspired millions of fans, and more than a couple of future star players.

Of course, it’s fair to say that Kobe was one of those players that many of us perhaps didn’t fully appreciate until he’d retired. Throughout his twenty seasons with the Los Angeles Lakers, his success came at the expense of many of our favourite teams, which made him “the enemy”. I’ll admit that as a Michael Jordan fan in my early teens, all the talk of this brash, cocky young player possibly being the one to dethrone His Airness didn’t endear him to me. It soured me on him, the same as it did the other “Next Jordans” who were heavily hyped. Although I would continue to champion MJ, I certainly came to appreciate Kobe Bryant, and acknowledge how great he was.

That’s not to say that I was converted into an ardent fan. He was still the guy who was destroying our favourite teams; always a threat to score 50 or more, or finish with a flurry of points and a gamewinning shot. However, even if we cheered against him, we respected him. For most of his career I voted for him to start in the All-Star Game, because he absolutely deserved that spot. If he wasn’t standing between your chosen team and victory, he was amazing to watch, with a dazzling offensive arsenal that few others could match. Once again, whether you were a fan or not, you couldn’t help but respect him and appreciate his talent. You booed him because he was such a threat. 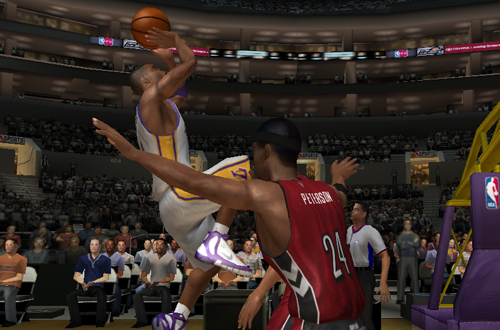 And you know what? From all accounts, he revelled in it! We see a lot of players talk about the haters and how they supposedly don’t matter, their words and tone betraying the fact it does get to them. Fair enough, too. I’m sure most players dream of being the hero, rather than the villain. In Kobe’s case, it seemed he understood that while many would see him as a hero, he would be the villain in the eyes of other fans, and that it was OK. It never seemed to bother him, nor prevent him from going out there and competing hard, doing what he did best. Again, a lot of players say that they don’t care about the haters, but I believe Kobe Bryant was completely honest about that.

Being that this is a site about basketball video games, I have to touch on his legacy on the virtual hardwood as well. For many years now, incredible performances by NBA players have been likened to “something out of a video game”, to the point where that has become another cliché. Sometimes it’s the best way of describing an amazing performance however, and Kobe Bryant certainly had a lot of those. Indeed, his 81-point outburst against the Toronto Raptors in 2006 stands as the perfect example. An article on NBA.com challenged us to replicate the feat in either NBA Live 06 or NBA 2K6, and a couple of years ago, I tried doing just that for Wayback Wednesday.

Let me tell you, it wasn’t easy, even spamming Freestyle Superstars moves! I was able to top his mark with a total of 92 points, but it took me a ridiculous 84 attempts to get there, and it ended up costing me the game. In reality, of course, Kobe’s incredible scoring barrage led the Lakers to a comeback victory. Again, we liken performances such as that to something out of a video game, yet when we get on the sticks, they’re actually really tough to replicate! It emphasises just how impressive feats like Kobe’s 81-point game are, and how special it is when we get to watch them live. I didn’t get to catch that one as it happened, but my jaw dropped when I read about it at work! Kobe Bryant was of course a cover player for more than one video game. By his second season, it was apparent that he was destined for great things, leading to him becoming the face of two games: Kobe Bryant in NBA Courtside for the Nintendo 64, and NBA Fastbreak ’98 on PlayStation (aka NBA Action 98 on PC and Sega Saturn), a forerunner to the NBA 2K series. He later appeared on the cover of NBA 2K10 and the Legend Edition of NBA 2K17, also featuring in the introduction and as an NPC in the latter’s MyCAREER mode. Since his retirement, he’s continued to appear in NBA 2K games on a couple of the retro squads, and as a collectable player in MyTEAM.

Obviously, there were some controversial moments in his career, and even in his passing, there’s been some contentious debate. I don’t feel it’s appropriate for me to get into that here, so all I’ll say in that regard is that it’s understandable people are mourning him, and thinking of his family at this time. I will say that I don’t begrudge the NBA for not cancelling the day’s games, yet I also think it would’ve been fine if they had, and not at all inappropriate if the players had collectively decided not to play and forced them to be rescheduled. It was touching to see teams pay tribute with 24-second and 8-second violations, and to honour Kobe’s memory in other ways.

There’s also some discussion about whether or not his number eight and twenty-four jerseys should be retired league-wide, especially with Mark Cuban announcing that the Dallas Mavericks will do so. I think it’s a great gesture on the Mavs’ part, but I also feel it should be up to each individual team. Allowing future players to wear those numbers in his honour would be a fitting tribute in its own right. With the tragedy so fresh and raw, and emotions running high, these discussions have been a tad heated. Personally, I don’t like to scold, point fingers, and rush to decisions and judgement at a time like this. For now, I think we should stand together as we mourn. We can also celebrate the career and life of a public figure taken from us too soon. Beyond his accomplishments on the court, and beyond his presence on the virtual hardwood, Kobe Bryant was a father, a husband, a mentor, and someone who clearly wanted to give back to both the community and the sport he loved so much. It’s a terrible loss, as is the loss of his thirteen year old daughter Gianna, and everyone else who perished in the accident. I’d have never thought that he would be a posthumous inductee into the Hall of Fame, but that’s what’s going to happen now. I wish we could have heard his induction speech when the time came, as I’m sure many of you do too.

As I said, there will no doubt be many more tributes to come. It may be painful to read and watch them, but hopefully we can all find solace in celebrating his career; it’s just a shame it has to be this way. Whether or not you were a Kobe fan during his career, anyone who truly loved the game of basketball respected him, and held him in the highest regard. Again, we can debate rankings, but some other time. Today, our thoughts should be with the Bryant family, and the friends and family of the other seven people who lost their lives. It’s also a sobering reminder to take nothing for granted, and to appreciate the time that we have with the people that we love.

Many of us who are now in our mid thirties were able to experience Kobe Bryant’s NBA career from start to finish, and that was special. As I said, rivalries and his fiery competitive nature inevitably cast him as a villain as often as it did a hero, so he’s one of those players that many of us perhaps didn’t appreciate enough until he retired. I’d like to think that underneath those tribalistic reactions, we all respected his abilities, work ethic, and competitive drive, and enjoyed his highlights. I’m confident that like Michael Jordan before him, he’s inspired so many people to work hard and strive for their goals. That is the Mamba Mentality he bestowed upon us. Vale, Kobe Bryant.