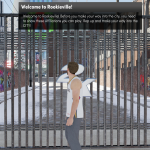 We’re at midcourt, and the ball is about to go up…it’s Monday Tip-Off! Start your week here at the NLSC with a feature that’s dedicated to opinions, commentary, and other fun stuff related to NBA Live, NBA 2K, and other basketball video games. This week, I’m tipping things off with the not-so-controversial declaration that Rookieville in NBA 2K21 Next Gen’s MyCAREER was a terrible idea.

I don’t want to say I told you so, but my track record with predictions is hit and miss, so I’ll take the opportunity to say: I told you so. Well, maybe not you, specifically. Perhaps like me, you saw the concept of Rookieville in NBA 2K21 Next Gen’s MyCAREER, and realised it was terrible idea. Perhaps you saw it for the gatekeeping measure that it is, instantly giving The City an air of elitism. If so, you looked past all the bells and whistles, and the admittedly impressive loading times, to see the issues with the approach. As such, you won’t be surprised that it’s drawing criticism.

Of course, fanboys and shills couldn’t see the drawbacks; or at the very least, didn’t want to acknowledge them. To actually take a deep dive into the problems with The City, and Rookieville in particular, is to be a spoilsport in their eyes. Why are we daring to hate on such a cool idea? Don’t we like fun? Aren’t we good enough to get past Rookieville and into The City? As I pointed out in my previous article, it’s not that getting past Rookieville is difficult; it’s that it’s unnecessary and problematic. It’s not surprising that fanboys and shills are ignoring the issue and bleating defensively, but it’s concerning that no one at Visual Concepts was thinking ahead here.

For those who aren’t familiar with MyCAREER in NBA 2K21 Next Gen, or if it’s been a while, the concept of Rookieville is as follows. Upon completing the pre-NBA portion of the story, you’ll find yourself at the Rookieville docks, outside The City. The object is to increase your MyREP to Pro 1, at which point the literal gates to The City will open, and you’ll actually be able to access the connected experiences, shops, Daily Prize, and so on. This is achieved by playing (and preferably winning) online games with other newcomers. It’s admittedly a straightforward process, and it needn’t take too long. I myself was past the gate after three games, two of which were wins. 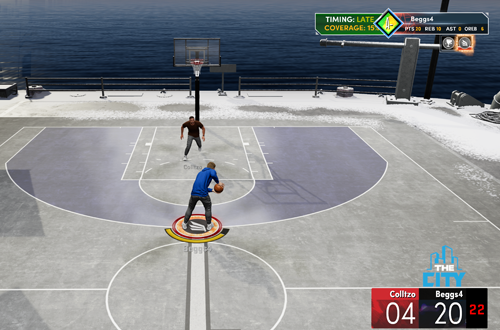 Indeed, I assume it’s only taken most people two or three games to get into The City, which isn’t too many. As I said though, it’s unnecessarily gatekeeping a bulk of the connected MyCAREER experience. Elitists would say this is a good idea, maintaining a certain skill level in the online scene. The problem with that way of thinking – apart from being utterly toxic, of course – is that it ignores that to “get good”, people must also have the opportunity to gain that experience and skill in the online arena. It also ignores that there are aspects of The City that should be accessible to gamers who are only interested in playing the NBA portion of MyCAREER (and yes, they do exist).

Conceptually speaking, having an arena that’s just for newcomers and/or casual online gamers isn’t a bad idea. I’m an advocate for deeper matchmaking options, as per many of my previous articles. However, Rookieville is inadequate in this respect as it only includes Park play, and only lasts a few games before you’re in The City. Not that it should take longer than that, mind you. It’s already pointless busywork and needless gatekeeping. The point is that it isn’t fully fleshed out enough to be a proper training ground, and being a temporary stopover, it isn’t a viable alternative that one can stick with if they prefer it. It hardly separates newbies and casuals from the alleged “elite”.

Let’s get to the heart of the problem, though. Yes, the whole gatekeeping aspect of Rookieville is needlessly elitist and toxic, asking us to prove that we deserve to access the main hub world. It’s not too difficult to get into The City, but to that point, it’s hardly a reward for seasoned gamers. The real issue is that getting out of Rookieville depends on the presence of other gamers being in the same position as you. In short, if no one else is likewise stuck in the docks waiting to level up and get into The City, you won’t have an opportunity to get past the gate. Playing a few games to level up your MyREP isn’t a tough task in theory, but it’s impossible without other gamers. 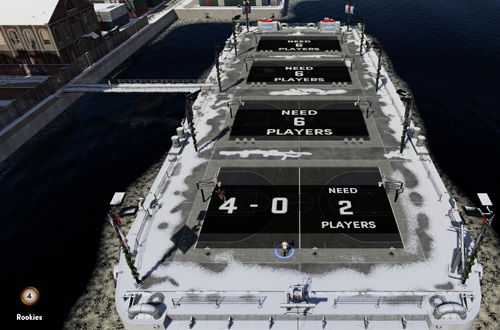 And guess what? Because we’re around six months past the release of NBA 2K21 Next Gen, most people who play MyCAREER’s connected modes are already in The City. Good for them (me included), but what about people who are just picking up the game, or checking out MyCAREER after spending time with MyTEAM, MyNBA, or something else? Unless there are enough newcomers in the same region that are online at the same time, the requirement of playing a handful of Park games down at the docks isn’t as feasible. I had to stand around waiting for games back in January, so the situation is only going to be worse for newcomers and latecomers months later.

In fact, I know it’s a problem, thanks to this thread over on Reddit titled “How am I supposed to get out of Rookieville when I’m the only one here?” This is an excellent question! Sadly, the only answers are “wait and hope for the best”, or “give up and hope 2K doesn’t make this mistake again in NBA 2K22”. And that’s why Rookieville is a monumentally terrible idea. It’s a massive design flaw to make unlocking basic functionality dependent on being able to get online games. The approach to MyREP rewards in general is bad enough, but at least once you’re into The City, there are more people to play with. It’s less feasible with Rookieville’s temporary population.

It speaks to poor planning, because this was a very obvious issue with the approach. There’s a certain arrogance to it as well, assuming that everyone who wants to play MyCAREER and its connected modes will be doing so from launch. That would be a problematic approach at the best of times, but given that this is a new generation and many gamers are still waiting to get their hands on a PlayStation 5 or Xbox Series X, it’s particularly myopic. Unfortunately, it combines two drawbacks that have been plaguing NBA 2K for some time now: catering to elitism, and not considering the possible downsides of an idea before implementing it. Again, it’s poor planning. 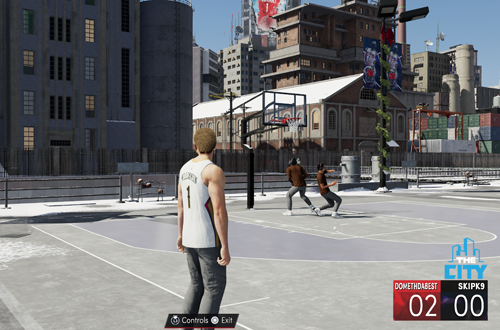 At this point, we have to consider solutions that admittedly may never come. Ideally, this concept can be abandoned or revamped in NBA 2K22 and beyond, though I’d advocate for the former. As far as NBA 2K21 is concerned though, the most obvious solution would be to patch in CPU opponents in Rookieville. I know; I’m sure that the mere mention of AI Players is making people frown, but a) this won’t affect you if you’re already in The City, and b) can you suggest a better way of allowing people to level up when they can’t find any human opponents? The tech is already in place with CPU opponents in the warehouse challenges, so it would be a viable solution for now.

Is it likely to happen? I have my doubts. All too often, 2K’s response to problems that affect the user experience is to shrug, if indeed they respond at all. The Daily Bonus was broken in NBA 2K21 Current Gen from launch, and their eventual solution was to just set it to “None” and effectively disable it (while conversely being very quick to patch VC exploits). Fixing the problem would also require acknowledging it, and that’s something 2K has traditionally been reluctant to do, because it casts the game in a bad light. The irony here is that by not acknowledging (and thus not fixing) issues, they actually look much worse, and end up further squandering their goodwill with us.

I’m frustrated about issues like this on behalf of my fellow gamers, but it also bothers me that not enough influencers and content creators are considering these issues, and speaking out about them. It’s not surprising of course, as refusal to toe the line results in a loss of access and perks. It shouldn’t be that way, as it’s very easy to bring these issues up in a respectful manner. If I sound a little terse in doing so, it’s because I’m fed up with the situation; if I sound a little smug, it’s because I saw this coming while all the shills and fanboys were trying to silence criticism, or deflect by making some snarky remark about NBA Live as if its struggles excuse problems with NBA 2K. 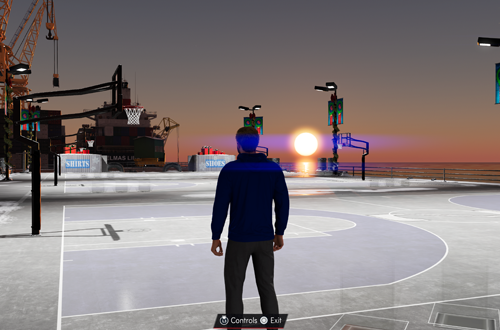 Although we have nothing to lose by speaking our minds and making suggestions as a community, I’ll admit that I’ve lost motivation to compile Wishlists and the like. It’s tough to see issues being resolved when feedback is shouted down by apologists, or elitists who take delight in the fact that they can laugh and sneer at gamers who are missing out, because they’ve already got theirs. From a lack of matchmaking options to conceptually flawed ideas like Rookieville, the online experience and competitive scene in NBA 2K is in rough shape. Sadly, 2K has been fostering the toxic, elitist attitudes that all too often stand in the way of the situation improving any time soon.

If that sounds too confrontational and jaded, allow me to put it another way. 2K’s online scene has the pieces in place to be much better than it is. There are different experiences on offer in The Playground and Pro-Am, with The Rec providing a pick-up alternative to the latter if you don’t have a squad. There’s stat tracking across all of the modes, and while they can be problematic in their own right, there are cosmetic options which can be fun to mess around with if you so desire. It can be a lot of fun, though it also requires properly polished gameplay mechanics. I’ve lost interest in the scene, but I want it to be as good as it possibly can be for anyone who is into it.

Rookieville is a terrible idea because it has no tangible benefit, and too many faults. It doesn’t train or provide any semblance of ranking or matchmaking. It only works if there’s a constant stream of newcomers trying to get into The City. It’s a gatekeeping measure that’s wholly unnecessary, and only fosters elitist attitudes. Even for elite gamers, getting past the gate is no reward, because by design everyone needs to get there eventually. And of course, it locks NBA-oriented MyCAREER players out of ways of earning extra VC through the Daily Prize and Daily Pick ‘Em. We’re seeing the problems come to a head, and you know what, shills and fanboys? I told you so.