Monday Tip-Off: Why Starting Ratings Must Be Higher 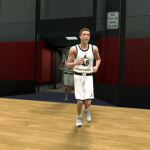 We’re at midcourt, and the ball is about to go up…it’s Monday Tip-Off! Start your week here at the NLSC with a feature that’s dedicated to opinions, commentary, and other fun stuff related to NBA Live, NBA 2K, and other basketball video games. This week, I’m tipping things off with a few thoughts on the ideal starting ratings for career modes, and why they must be a little higher than they currently are.

The only reason that I’m considering spending any time in MyCAREER this year after feeling burned out on the experience is to build a player for the online modes. Since our NLSC squad has spent a little time in the Jordan Rec Center so far, I’d like to have a player that stands a chance of being competitive online, without having to spend any money on VC this time around. Fortunately, Badges are easier to earn in NBA 2K19, but the process of levelling up from 60 Overall is still quite a daunting task if you don’t have a stack of VC on hand for an initial boost.

In previous articles, I’ve talked about how the grind has turned me off MyCAREER, and how it makes starting over every year feel wearying and unsatisfying. While I’ve vaguely touched on some solutions, I’d like to offer up some more definitive ideas on how to address the problem. One of the key issues that must be addressed is the low starting ratings we begin with every year. It’s a delicate situation as those ratings can’t make the game too easy or too hard, the journey too long or too short. Throw in the matter of competitive and accessible online play, however, and I think it’s clear that starting ratings in MyCAREER must be higher.

As I alluded to, it’s certainly important that levelling up your player in MyCAREER can happen at a steady pace; not so slowly that you get frustrated, but not so fast that you reach 99 Overall too early or easily. To ensure that the journey is not a frantic sprint, starting out with lower ratings is an obvious solution. However, I would suggest that the 60 Overall we begin MyCAREER at is too harsh. It ranks us as one of the worst players in the league, lower than most benchwarmers. When you take into account that the stories portray us as being something special and often The Next Big Thing, there is a clear disparity between narrative and gameplay. 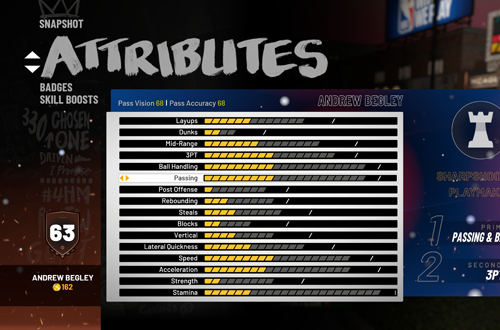 Let’s put aside the story for a moment though, and just focus on the gameplay. Again, it’s understandable that we begin our career being relatively underpowered and need to build up our MyPLAYERs, but we have too many attributes to develop given the cost of upgrades and the ratings that we begin with. There’s a difference between a prospect with a lot of potential, and someone who has no business playing in the NBA. When you look at some of the starting ratings for various MyPLAYER builds, it definitely feels like you’re the latter. There are a couple of key conceptual issues that need to be addressed here, and it’d go a long way towards fixing the problem.

First of all, not only are our skills quite low to begin with, but so are all our athletic attributes. This means that point guards have trouble outrunning plodding bigs, while slashers need to grind just to be above average athletes. Sure, Archetypes provide a token boost to key attributes, but they’re still quite low across the board. Secondly, because skills like shooting, dribbling, passing, and so on are also quite low, it’s a slow process with lots of sacrifices and trade-offs as you grind to become both skilled and athletic enough to be competent and competitive. It’s part of the challenge and the experience, yes, but it’s too much of a handicap, to the point of being unrealistic.

This is an area where NBA Live has demonstrated a much better approach. The lack of pay-to-win mechanics is unquestionably a benefit here – and we will come back to that issue – but one of the main advantages of The One’s progression system compared to MyCAREER is that the starting ratings are higher. In NBA Live 19, you’re rated in the early 70s at the start, and through a linear progression path, you mostly stick to levelling up the key skills for your Play Style. Those start out at a level that allows you to at least be competent, as do the ratings that you can’t choose to upgrade at will. As such, your player at least has some athleticism and solid fundamentals. 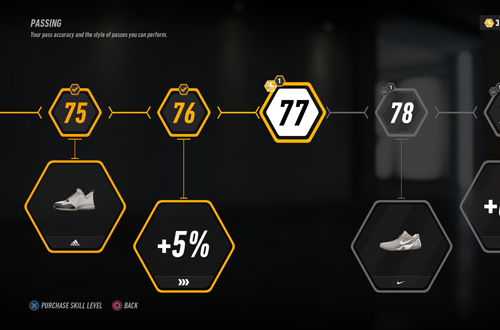 In turn, this means that playing online is viable from the moment you create a player in The One and complete The Rise. Needless to say, you’re still going to be at a disadvantage if you have a low-rated player, but it’s a fairer handicap. Compare and contrast this with MyCAREER, and the connected online experiences of Pro-Am and The Playground. If you try to play those modes right away without grinding furiously or purchasing some VC, you’re probably not going to have a lot of fun. The online experience in 2K isn’t welcoming to gamers who want to dive in immediately, unless they participate in the pay-to-win mechanics that set the competitive balance.

This is obviously by design, as it boosts VC sales. MyCAREER can be enjoyed as a slow burn if you have the patience, but if you want to play online right away (as many people do), you’ll have to grind, pay, or suffer. It’s an issue that could be addressed by raising the starting ratings, ideally by boosting the base athletic ratings and key skill attributes for each Archetype, and then adjusting the progression system accordingly. That way, the online modes are a fairer and more bearable for gamers who want to jump right in. MyCAREER stories will also be more fitting, since your player will actually feel like they belong in the NBA instead of the local rec league.

Specifically, I’d suggest raising the starting athletic ratings to around league average; give or take a few points depending on the chosen Archetype and physical attributes. The same goes for skills. For example, a pure Playmaker build should at least match the league average in terms of their passing and dribbling ratings, and shouldn’t have as far to go to elevate them to All-Star or elite level. The same goes for shooting and scoring Archetypes and their offensive ratings, defensive builds and their attributes, and so on. There can and should still be a grind there, but picking a certain Archetype or hybrid Archetype should also offer a few more tangible benefits. 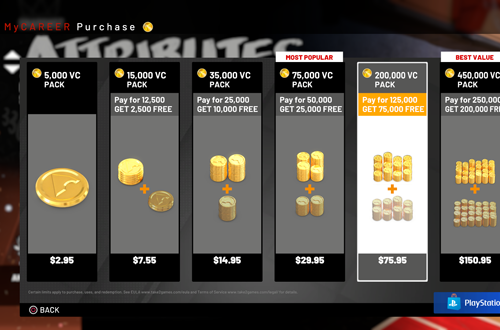 Although this was supposedly addressed in NBA 2K19, a lot of the Archetypes (and hybrid Archetypes) seem underpowered, and less than optimal choices. If nothing else, they don’t compare favourably to a majority of benchwarmers out of the gate, and none are suitable for an early foray into online play…unless you do what needs to be done to get a lot of VC quickly. I’ll often see people sneering “Don’t like paying for VC? Just don’t buy it!”, but that’s not the issue. As long as the starting ratings are low, there are people who will buy VC, and they determine the competitive balance. We can personally boycott the practice if we wish, but that just ensures a disadvantage.

Since changing the starting ratings would likely eat into the all-important recurrent revenue, I’m not confident that we’ll see such adjustments. Even if the developers could make those changes in a way that satisfies 2K’s need to boost their profits with microtransactions, great care would need to be taken in order to ensure that the Road to 99 is well-paced and not too easy. Once again though, I believe that NBA Live has done a great job in this regard with the progression system in The One. It does have the drawback of a more linear path and rigid player builds, but NBA 2K already has a lot of flexibility in this area, and they needn’t lose that in fixing the starting ratings.

Right now, MyCAREER is playable with the starting ratings 2K has chosen for our MyPLAYERs. We can change the settings, play on a lower difficulty while we grind, and increase the challenge once our players have levelled up to being competent. We don’t have that luxury online though, and it discourages gamers from trying out those modes unless they grind hard or pay to level up quickly. Frankly, it’s literally putting a price on enjoying the online experience. The fair thing to do would be to at least make online play viable out of the box, and that means raising the starting ratings. Surely, the recurrent revenue stream won’t run dry because of a little balancing and goodwill.