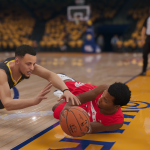 I’ve stated my position on this before, and I still feel the same way. Basically, I feel it matters less who does it first, but who does it best. Furthermore, if it’s a great idea, then it should be something that both games try to implement, albeit with their own specific approach. If the goal is to realistically depict the NBA and style of basketball played in the league, then there should be some overlap. When a certain mechanic proves to be the best way of representing the sport on the sticks, both NBA Live and NBA 2K should have their own variation of it. If a particular mode proves to be very popular, then both games should provide that experience, in their own way. 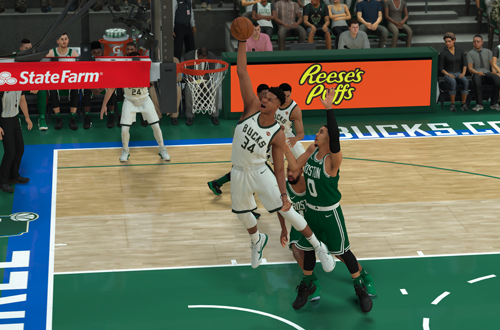 Basketball games – indeed, video games in general – have been taking ideas from each other for decades. In that regard, they’re like any other product or service where there is competition. It’d be foolish to ignore current trends and what your customers want, so the goal is to provide the best possible version of the product in question. Over time, certain features and aspects become standard, and preferred. If we take a look back, we can identify several ideas that originated in one game and were subsequently adopted by the other. It’s been for the benefit of both titles, and there are more ideas I’d like to see NBA Live adopt from NBA 2K (and vice-versa), with their own spin.

Would that constitute stealing? I don’t think so. I see it as part of healthy competition and meeting the needs and wants of basketball gamers. However, I can understand where some of the outrage is coming from. Due to its struggles, NBA Live doesn’t always get the credit it deserves for pioneering certain ideas. After all, it was NBA Live that first brought franchise gaming to the virtual hardwood. Right stick dribbling was also an EA creation, along with All-Star Weekend events. Even though the series has struggled this generation, concepts such as the approach to player progression in career modes and some of the on-ball defensive mechanics have had merit.

To that end, when NBA 2K has adopted similar features in its gameplay and modes, it has sometimes received credit for what was originally an NBA Live innovation. To a staunch NBA Live supporter, that might seem like an extra kick when the game is already down and fighting for respect and relevance. I get it, and with that in mind, it is fair to point out who started the revolution. As I said though, once the idea is out there, it’s less about who did it first, but rather who did it best. MyLEAGUE and MyGM are far beyond any NBA Live Franchise mode. MyCAREER is deeper than The One. 2K has spent years refining its NBA gameplay and overall experience. 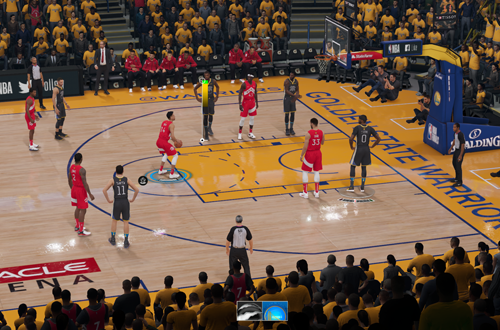 In fact, it’s a compliment whenever ideas are “stolen”; and since that is an ugly word, let’s go with “borrowed” instead. For all the flak that NBA Live received for not being up to par, one might conclude that it doesn’t bring any good ideas to the table. That isn’t the case, as anyone who has actually played NBA Live this generation will know. 2K clearly knows that as well, as despite being the brand leader, they’re adopting some ideas that NBA Live has dabbled with first. They wouldn’t be doing that if the ideas weren’t worth stealing – excuse me, borrowing – so really, it’s validating some of the things that NBA Live has been doing. It’s proof that they’re beneficial concepts.

Mind you, it’s admittedly putting the screws to NBA Live, too. Forget about taking credit for the ideas; it’s taking away an edge, a hook that might make NBA Live a viable alternate to NBA 2K. Of course, that’s on EA as well. If you have the idea but can’t execute it as well as the competition, then that’s a missed opportunity for you. Obviously NBA 2K has several advantages here with a better reputation, a larger development team with more resources, and an overall superior product to build upon. It’s easier for NBA 2K to implement NBA Live’s best ideas than it is for EA Sports to copy from Visual Concepts’ exam paper, though I do think they should be doing that.

Still, the fact that NBA 2K is “stealing” ideas from NBA Live validates what the latter has been doing. It means that in some respects, EA’s game is on the right track. As one of NBA Live’s biggest pitfalls has been starting over from scratch and changing direction too often, knowing that a feature or mechanic is a good idea should serve as an indication they need to retain, refine, and improve upon it, while also building up other areas of the game (and yes, “stealing” a few ideas from NBA 2K along the way). Should you want to indulge in fandom rivalry, it’s also an opportunity for NBA Live supporters to point out that the game does in fact have its good points. 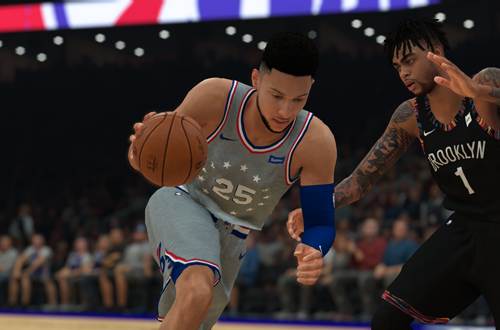 If you’re still hung up on the ethics of the matter, allow me to draw a comparison with our modding community. Just because someone in the community makes a current roster update that strives for realistic ratings and frequently updated lineups, it doesn’t mean that no one else is allowed to try their hand at it. If you can make a better face update for Stephen Curry than anyone else has produced thus far, there’s no reason for you not to release one. Putting aside supply and demand, possibility of collaborations, and literally stealing work – none of which are an issue with NBA Live and NBA 2K, incidentally – there’s no harm in overlapping ideas, no quarrel over who did it first.

As with our modding community of course, it’s only fair to give credit where it’s due. It is unfair when NBA Live doesn’t receive its due for innovations that it pioneered, not to mention frustrating when NBA 2K can better capitalise on a concept. It does make it just that little bit harder to get back to the point where we should be, which is having at least two viable sim-oriented NBA titles to choose from (or for that matter, alternate between), and for both games to be outstanding. To get there, however, ideas and concepts need to be borrowed. Stealing is such an ugly word for a practice that both EA and 2K should partake in, in order to make the best games they possibly can.

Thorough writing as always! In comparison with Konami (PES) vs. EA (FIFA) that steal so valuable club and championship licenses from each other every single year, we all are gonna have access to all of the NBA teams, plus the WNBA ones too.

Definitely. It’s just a shame 2K has been able to sign so many of the historical players to exclusive deals, or so it seems.