Monday Tip-Off: A Stop Sign on the Road to 99 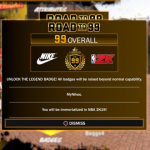 We’re at midcourt, and the ball is about to go up…it’s Monday Tip-Off! Start your week here at the NLSC with a feature that’s dedicated to opinions, commentary, and other fun stuff related to NBA Live, NBA 2K, and other basketball video games. This week, I’m tipping things off with a few thoughts on losing interest in MyCAREER, and the long grind on the Road to 99 in NBA 2K18.

As I mentioned yesterday in my first attempt at hosting the NLSC Podcast solo – don’t worry, I’m not intending on making that a regular occurrence! – I’ve lost my interest in MyCAREER and its connected modes. This is in stark contrast to last year in NBA 2K17, where I reached the second season. I even played twelve minute quarters and abstained from simulating, except for a few minutes of garbage time in a handful of games towards the end of my rookie year. Although we briefly took a break from the mode, the NLSC’s official 2K Pro-Am squad was also active throughout the year. In short, I had a lot of fun with MyCAREER and the connected online experience.

That hasn’t been the case this year. I’ve spoken before about the lack of goodwill, and the ridiculous in-universe value of Virtual Currency. On the Podcast, we’ve discussed our frustration with the lack of balance and proper matchmaking in online gameplay, as well as some of the gameplay quirks that bother us the most. Admirably, Arcane is already through to his second season, and currently sits at 92 Overall. I did intend to grind my way to at least 90 Overall – I’m presently at 89 – but right now, I can’t see it happening. Forget about 2K Pro-Am; at this point, I’m not interested in playing the single player experience of MyCAREER. I’ve reached a stop sign on the Road to 99.

One of the most apt criticisms I’ve read regarding MyCAREER and the whole Road to 99 concept in NBA 2K18 is that it feels like you have to work just to have fun. In other words, the process of levelling up your MyPLAYER isn’t an enjoyable part of the experience. I did see that sentiment expressed last year as well, but I’ll admit, I was happy “Doin’ Work” in NBA 2K17. Admittedly I got a head start with the pre-order VC (and a little more I bought on top of that), but even after that, progression felt smooth and steady. Whether it was earning Badges, or building up my attributes, I was able to develop my player at a reasonable pace. In NBA 2K18, conversely, it feels like a chore. That’s partly due to the whole concept of the Road to 99, which is intended to reward users who really put a lot of time into the game. In all fairness, it shouldn’t be too easy to hit 99 Overall, especially since every part of the MyCAREER experience – your NBA career, 2K Pro-Am, and The Playground – all contribute to your progress. However, once you hit the upper 80s – still a fair distance from 99 – that progress slows to a crawl. It’s frustrating to see the Cap Breaker meter inch forward by one percent or less after a game or training drill, only to unlock a couple of unimportant attribute upgrades when you finally fill it.

To put it in perspective, I’ve seen MyPLAYERs in The Playground that have played over 2000 games and are still rated in the low 90s. In my experience, a competitive game in The Playground can take around five minutes on average. That means they’ve sunk at least 150-200 hours into the game, and are still a long way from 99. As a point of comparison, I’ve had playthroughs of Fallout 3 and Fallout: New Vegas where I’ve done everything there is to do, that have clocked in at significantly less time than that. That’s not even taking into account load times, traversing The Neighborhood, training, cutscenes, any MyCAREER games, intros, celebrations, and waiting in Got Next.

Again, it shouldn’t be easy to hit 99, but it shouldn’t be a chore, either. The Road to 99 should feel like a fun journey and a rewarding experience, not an arduous task that you need to slog through just to build up your player to the point where it’s possible to be competitive with them (especially online). It’s even tougher if you’re not buying any VC for a quick boost here and there, especially since a lot of other gamers will, which ultimately dictates the competitive balance. Badges also take a lot of grinding this year, and they have a Catch-22: you need to grind to earn the Badges, but you also need the Badges to reliably and successfully do what you need to do to grind.

My belief is that it’s an overcompensation for NBA 2K17. It was admittedly perhaps a little too easy to level up last year. No matter what Overall you were, you’d earn the same amount of progress on the “Doin’ Work” meter for games, training drills, and even just shooting around on your MyCOURT. It was quite feasible to hit 95 Overall – the maximum level you could reach without boosting your MyPARK rep – within your rookie season. Badges came a little quicker and easier, and were upgraded from Bronze to Gold using VC. It took a while to then upgrade them to Hall of Fame level, but that too was quite doable in the first year of MyCAREER. With all the changes that have been made in NBA 2K18, however, the pendulum has swung too far the other way. VC earnings are lower, and upgrades are expensive. The upgrade system has changed from the “bucket” approach back to individual attributes. There’s no difficulty modifier for VC or XP. Cap Breaker progress grinds to a halt once your Overall rating is in the upper 80s. Throw in the issue of wasted XP in drills that divide it between two Badges until one is maxed out (at which point the leftover XP is just discarded), as well as the need to run all over The Neighborhood, and it’s more messing around and grinding than I can be bothered with.

I guess it wouldn’t matter as much if I were enjoying the general gameplay experience of MyCAREER, 2K Pro-Am, and The Playground, but that hasn’t been the case this year. I’m at the point where I can put up some big numbers in MyCAREER games, but it doesn’t feel fun. I don’t feel gripped and eager to play as I did in NBA 2K17. The lack of balance and limited matchmaking online has dampened my enthusiasm for that experience as well. It’s great that Badges are universal across the connected experiences and progress can be made in all of those modes, but right now, I just don’t feel inclined to put in the necessary time and effort.

It’s possible that I’m feeling some degree of burnout. That’s why I’m open to moving on to different modes and experiences, such as MyLEAGUE and MyTEAM, which I also enjoy. However, I don’t believe it’s all on me. I’ve seen others express similar thoughts about this year’s grind. The upgrade and progression system also doesn’t compare favourably to NBA Live 18’s approach, which doesn’t feel anywhere near as arduous. It’s quite feasible to create more than one player in The One, and build them up. I can’t imagine having the time or patience to build a second MyPLAYER. You really have to stick with one, even if there are issues with your build.

I’d like to end on a more positive and constructive note, so let’s consider what can be done in NBA 2K19. Basically, the game needs to strike a better balance in terms of how quickly you can progress on the Road to 99. Fairer VC rewards, higher XP, and slightly lower XP requirements for the Badges and Cap Breaker, at least until you’re aiming for Hall of Fame level and 95+ Overall. It’s important to make upgrading a challenge, but not a chore. Better matchmaking would also make online play more accessible to new players, as well as those taking a slower route on the Road to 99 because they’re not buying stacks of Virtual Currency. I believe there’s also merit in balancing the gameplay by making certain Badges (like Clutch ability) earnable through in-game performance, rather than automatically unlocking them at a certain Overall rating. The main thing is that the journey on the Road to 99 is fun and rewarding, and not something you have to endure before you’re able to actually enjoy the online and offline experiences that NBA 2K has to offer. It’s hard enough starting over from scratch every year, after all. The Road to 99 shouldn’t be a free ride in a Neighborhood paved with gold, but it shouldn’t be a 200+ hour walk over broken glass and hot coals in worn-out 2K Generics, either.

So true, great article. This is actually a round-up of my whole experience in 2K18 this year. Too many drills, too little memorable and fun memories.

It’s good to know that I’m not alone on this one. The experience needs adjusting and re-balancing in NBA 2K19, but with “recurrent revenue” being so high, I’m not sure whether we’ll see the changes we want (and need).

There were a few red flags during the preview season. I obviously get the game every year so that I can cover it, but it’s felt like a letdown after NBA 2K17.