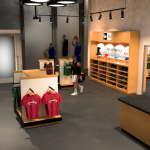 We’re at midcourt, and the ball is about to go up…it’s Monday Tip-Off! Start your week here at the NLSC with a feature that’s dedicated to opinions, commentary, and other fun stuff related to NBA Live, NBA 2K, and other basketball video games. This week, I’m tipping things off with a few thoughts about the increasing focus on getting new clothes for your avatar in the career modes of NBA Live and NBA 2K.

There’s a well-established video game trope that TV Tropes calls “And Your Reward Is Clothes“. It refers to unlocking new clothes for the player character (or characters), sometimes by completing tasks or purchasing them from an in-game store, or perhaps by finishing the game and continuing the adventure with post-ending gameplay. They may convey or accompany other bonuses, or they may just be for bragging rights. A good example of the latter is the “I completed Vice City and all I got was this lousy t-shirt“, unlocked when achieving 100% completion in Grand Theft Auto: Vice City.

Clothing items, and the ability to acquire new clothes, have become an increasingly prominent part of basketball video games. Although they are ultimately just cosmetic, they’re nevertheless a significant part of the game’s culture, especially when it comes to the online scene. It’s one of those aspects of modern games that make me feel like a dinosaur, because to my mind, there’s far too much focus on them. Although they’re something that can be ignored, the pursuit of new clothes and the focus given to dressing up your avatar is presenting some problems, and detracting from the overall experience. That may sound melodramatic, but allow me to elaborate.

The focus on acquiring new clothes and building up a wardrobe – so much for modern basketball titles being more than Barbie dress-up games – does have ramifications beyond what they look like on the virtual hardwood and blacktop. The approach of defaulting to the same ugly outfit every year in MyCAREER – and in the process, losing all the outfits we see in The Prelude story – is no accident. If NBA 2K gamers want their MyPLAYER to look less generic, if they want to be seen as online veterans and serious competitive players, they’ll need new clothes. Ironically, identifying yourself as a serious competitive player often involves donning outlandish attire! 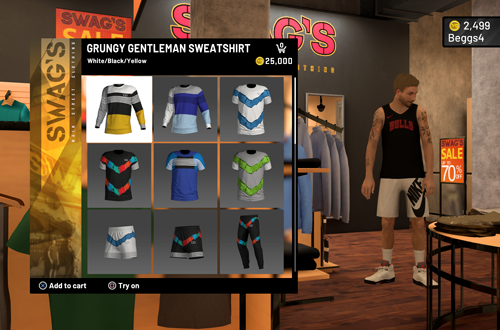 In Fortnite, young gamers are being bullied and shunned for wearing the free default outfits rather than premium skins which must be purchased. Similar attitudes have permeated the online scene in NBA 2K, where wearing the default outfit or the pre-order clothes is a mark of inexperience, or insufficient skill and competitiveness. Yes, MyREP, stats, and win-loss records are still important, and with that in mind, some competitive Playground gamers actually don the default outfit as a joke (or to try to hustle their opponents). More often than not though, if you don’t look the part of a Playground veteran, you’ll have trouble getting randoms to stick around for games.

This is by design, of course. To get new clothes, you’ll need to spend VC; the same currency used to purchase attribute upgrades. You can budget accordingly, sure, but if you want to get into the scene sooner, you’ll need to increase your ratings and outfit your player in appropriate duds as quickly as possible. That means a lot of grinding, or dropping some real money on VC. Either way, 2K earns their recurrent revenue, or gets to tout user engagement because of all the combined hours people spend playing the game. Alternatively, it encourages purchases and pre-orders of the premium editions of the game, because of the hefty amount of VC and exclusive clothes.

Speaking of the clothes that make up the annual pre-order bonuses, is there anything less useful to gamers who don’t care about MyCAREER or the connected online modes? Even if you play those modes, additional VC or immediate Badge unlocks would surely be preferable. Then there are the new clothes that are added throughout the year, often at exorbitant prices that are even more ridiculous when you work out the in-universe value. It’s not the only new content that’s added of course, but the focus that new clothes receive is disproportionate to their actual value. As for the cost, even designers with clothes in the game are speaking out about how ridiculous it is! 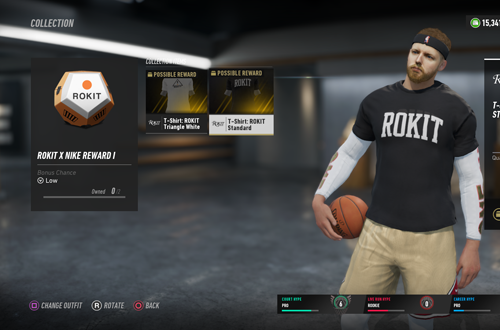 NBA Live has a different problem with clothing and cosmetic items. Unlocking new clothes is a common reward for completing LIVE Events, a by-product of NBA Live’s partnership with various clothing brands. I’m sure that many gamers do enjoy that, but I’m afraid I just can’t get excited about winning new clothes in a basketball game. It’s especially annoying given the lack of attention paid to Ultimate Team content in NBA Live 19. Look, I can’t speak for everyone, but interesting challenges and new cards in LUT, bonus content such as Legends in the default rosters, and other features that add depth, are far more important than unlocking a BAPE shirt for my player in The One.

Even putting aside that other content – which NBA Live really shouldn’t – there’s so much more that LIVE Events could offer than clothing items. There are other rewards including players for the Court Battles mode, custom animations, and so forth, but new clothes are far and away the most common items on offer. It doesn’t help that LIVE Events, and even the regular clothing shop in The One, use loot box mechanics. This means you have to buy the same loot box multiple times, or play through the exact same LIVE Events challenge more than once, in order to get everything that you want. It’s a repetitive slog, all to get some new attire and maybe some other rewards.

Maybe I’m out of touch on this one, but I believe that basketball games should focus on, well, basketball. The sport does have its own culture that includes shoes and other clothing, so it’s not inappropriate that custom attire is a part of the game. However, it shouldn’t be acting as a makeshift matchmaking system, where it only serves to cultivate a toxic atmosphere. It shouldn’t be used to push microtransactions in a Triple-A title. Clothing shouldn’t be the primary form of fresh content, ahead of roster updates, patching bugs and fine-tuning gameplay, adding cards in the team building modes, and anything else that’s far more directly related to the sport of basketball. 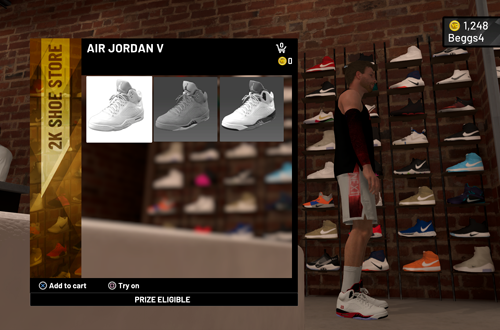 I’m not suggesting that custom clothing has no place at all in basketball games. It’s satisfying to personalise your avatar. I like getting Jordan Vs for my player to wear in MyCAREER every year because they’re the first pair of Air Jordan shoes that I ever owned, and thus they’ve become part of my avatar’s style. It’s a way of standing out, and it’s something to spend your VC on when you’re swimming in it and have nothing else you need or want to buy. It’s also fine that they’re part of LIVE Events and player customisation in NBA Live’s The One, too. It’s their prominence that I don’t like, not their presence. In NBA Live especially, there are more important things to work on.

As TV Tropes reminds us, tropes are not bad. There’s a time and place for “And Your Reward Is Clothes” in basketball games, and a use for them to inject some extra fun into the gameplay experience. However, they shouldn’t be a status symbol, blatant cash grab, or the primary form of regular content updates. There are more exciting pre-order bonuses, useful rewards, and important aspects of the game to focus upon. I admit that I’m not the core demographic for this kind of content, but eventually, even gamers who are enthusiastic about virtual clothing items will expect something more. At that point, the avatar’s new clothes will be as see-through as the fabled Emperor’s.