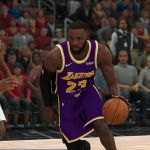 We’re at midcourt, and the ball is about to go up…it’s Monday Tip-Off! Start your week here at the NLSC with a feature that’s dedicated to opinions, commentary, and other fun stuff related to NBA Live, NBA 2K, and other basketball video games. This week, I’m tipping things off with some thoughts on the state of official rosters in basketball games, particularly NBA 2K.

No matter whether you’re a developer working on the official rosters or a gamer who’s making unofficial updates for the community, it can often be a thankless job. There’s no chance of pleasing everyone when it comes to player ratings, especially given the overinflated importance that Overall Ratings are often ascribed. With over 400 active players along with historical content, it’s very easy to overlook a detail here and there, no matter how meticulous you are. I’m not sure that I’ve ever released a roster for NBA Live PC that didn’t have at least one small oversight.

The feedback that you’ll receive as a roster maker in the community, or indeed as the developer in charge of handling the official rosters, isn’t always constructive or very pleasant. We’re quick to sneer at a perceived bias or lack of knowledge, forgetting that we’re all prone to the same biases and knowledge gaps, to say nothing of human error. At the same time, we’re slow to give credit where it’s due. With that being said, there are some troubling trends when it comes to the official rosters in modern games, in particular NBA 2K. Without meaning to be insulting or self-righteous, it doesn’t feel like the rosters in recent titles have the same level of authenticity as they once did.

One of the biggest issues, of course, is ratings. Right now, we can question whether emphasis is being placed on performance and realism, or politics and perception. A Twitter poll posted by SLAM Gaming last July asked if the ratings that had been revealed for NBA 2K20 were accurate. In addition to 68.3% of voters feeling they weren’t, the official NBPA Twitter account chimed in, criticising the ratings of Nikola Jokic. The NBA 2K account responded, suggesting that Jokic should get on Twitter if he wanted to be rated higher than 90 Overall. This led to the official Denver Nuggets account firing back, sarcastically pointing out the ridiculousness of such criteria. 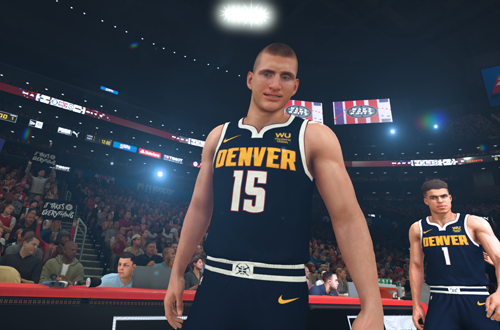 Now, that was a glorious Tweet – I believe “clapback” is the word we’re using these days – but before we get too carried away, it’s worth noting that it’s all banter. It’s not definitive proof that that’s how 2K is actually handling ratings. Again, Overall Ratings do have overblown importance; aside from a general ranking among all the players, they don’t always represent how well a player performs (though they may indicate a few inaccuracies). However, revealing player ratings has become a major part of NBA 2K’s marketing every year. The numbers appeal to our general perception of a player’s value, and they’re intended to get the players themselves to share teaser screenshots.

That’s important to remember, as is the interest players have in seeing their ratings. Putting aside the truly unreasonable expectations of late first round picks who believe that they should be rated in the 90s, players clearly get a kick out of seeing themselves in the game, and want to be rated according to their abilities and performance. We’ve even heard players refer to their Overall Ratings in NBA 2K after big games, and ask for an increase accordingly. 2K has obliged in subsequent official rosters, and to be fair, it’s usually been warranted after a sustained stretch of good play. The problem is that it also hints at politics, and appeasing players over striving for realism.

It’s been noted that our MyPLAYER in MyCAREER begins with a lower Overall than basically any rookie in the official rosters. To put it in perspective, ignoring all of the placeholder players on the retro teams, the lowest rated active players in NBA 2K20 were 66 Overall, which was actually higher than some of the far more accomplished journeymen and core rotation players on the retro teams. At the other end of the scale, there were several solid role players rated in the early 80s, which seems high given their actual production and skill level. Although Overall Ratings aren’t the be-all, end-all, when they appear to be too high or too low, it’s usually a sign there’s inaccuracies. 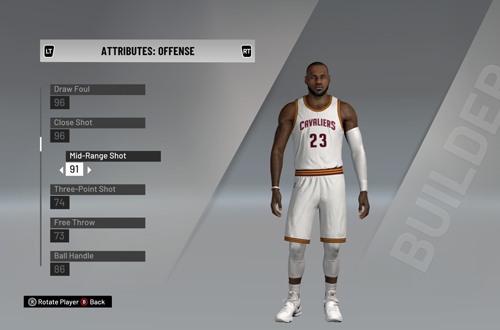 Delving into the individual ratings, we can see that is definitely the case. To spotlight a particularly egregious example, LeBron James has a strong midrange rating, despite not shooting particularly well from that distance. This also applies to the historical versions of LeBron. As Dee4Three spotlighted on Twitter, LeBron’s performance from midrange has been consistent throughout his career, yet all versions of him in NBA 2K have similarly inflated ratings. Indeed, they’re higher than the ’86 version of Michael Jordan, who thrived in the midrange far more than LeBron. Similarly, the ’12 version of Russell Westbrook has higher midrange ratings than ’98 Kobe Bryant!

Such discrepancies and inaccuracies are not uncommon, with several players having ratings that are at least a few points too high given their actual performance. The fact of the matter is that ratings do get fudged, be it an individual attribute or the Overall, to match general perception and presumably avoid causing offense; or, in some cases, to prop up modern players at the expense of historical accuracy. It isn’t always a huge discrepancy, but the fudging leads to inaccuracies all the same. I know that there’s a debate regarding the balance of realism and fun – which unwittingly suggests that realism isn’t fun in a sim title – but the official rosters should be striving for accuracy.

It’s frustrating because NBA 2K seemed to hit on a really good idea with the Hall of Fame Ratings Scale they introduced in NBA 2K16. The idea there was that to qualify for the highest ratings in the official rosters, players must favourably compare to the best all-time performances. In other words, if Dennis Rodman is the standard for rebounding ratings, then a player can’t have the same ratings unless he’s on that level. It doesn’t matter if a player is the top rebounder in the league today; if Rodman’s numbers are the threshold for 99 rebounding ratings, then those are the numbers to equal, best, or at least come close to, in order to qualify. There were standards. 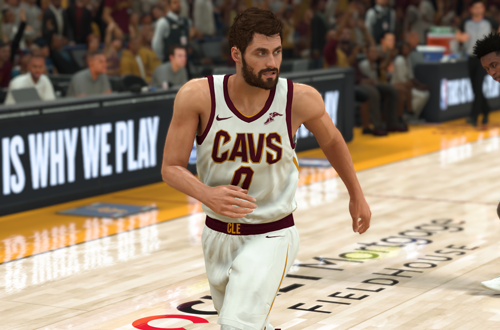 By NBA 2K20, those standards were thrown out the window. Kevin Love and Jared Dudley had higher midrange ratings than ’98 Michael Jordan and ’86 Larry Bird. The current Pau Gasol, in the Free Agents following his retirement, had a higher defensive rebounding rating than any version of Dennis Rodman. Matisse Thybulle had a steal rating of 97, third best in the entire game. Beyond comparisons of past and present, there are several issues with historical players in general. Pre-three-point era players like George Mikan have strong three-point ratings, and many retro players have been assigned incorrect animations, such as their dunk packages and free throw routines.

On top of that, certain animations have been removed or had their IDs changed, and the players that were using them haven’t been updated accordingly. This has led to historical players like Dominique Wilkins and Clyde Drexler using set shots, which they most certainly did not in real life. The lack of authenticity runs counter to what NBA 2K always strove to be, and does end up negatively affecting the experience. We also see these issues affect cards in MyTEAM, where we can’t edit ratings or animations. Ratings, the chosen animations, and of course Badges, can make players very underpowered or overpowered, and not play like their real life counterparts.

This is quite unfortunate to see, as that kind of authenticity and attention to detail is something that NBA 2K used to pride itself in. Nowadays there’s more sloppiness, a seeming abundance of copy and paste jobs, to say nothing of ratings that seem to fit an agenda rather than accurately represent skill and performance. A similar thing has happened in the WWE 2K series, with Roman Reigns being rated higher than any current or former wrestler to push him as the current face of WWE. Of course, with professional wrestling being a work, WWE 2K’s ratings do reflect storyline abilities. We’d expect NBA 2K’s ratings to be more impartial, and based on measurable stats. 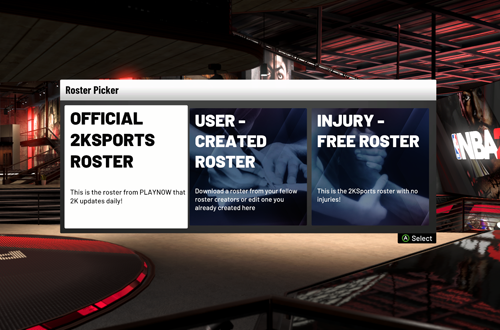 Look, it’s easy for us to criticise the quality of the official rosters. Over the years, a lot of roster modders have claimed to know better than the devs, with self-aggrandising forum and blog posts touting the quality and accuracy of their work. In my chat with Rod Reddekopp, he recalled gamers back in the day commenting that they didn’t want to touch the game until they had Tim’s rosters to play with! And hey, I’ll also admit to feeling like I’ve produced some pretty decent rosters over the years. As I mentioned before though, it would be fallacious to think that we don’t fall victim to our own bias from time to time, have gaps in our knowledge, or simply overlook a player or two.

However, we also have more freedom than the producers who work on the official rosters. We don’t have to worry about appeasing NBA players so that they’ll promote the game, or appealing to the more casual gamers who won’t pore over ratings, as well as fans who believe that older players were all “plumbers and dentists”. Admittedly there’s nothing we can do for MyCAREER or MyTEAM, but we can craft improved rosters for Play Now and MyLEAGUE. The problem is that that takes time, and when there’s too much to fix, it’s understandable that gamers feel unmotivated to make all of the necessary adjustments. The games should be fairly pick-up-and-play, after all.

If there are politics behind the scenes when it comes to ratings and promotion, then the producers in charge of the official rosters are in a tough spot. Still, I’d like to see more accuracy, more attention to detail. If nothing else, unsuitable animations should be fixed, Badges properly balanced, and individual ratings as accurate as possible. A bit of fudging is to be expected because Overall Ratings do matter to some extent, but keep it within a realistic range. I realise that “accurate rosters” isn’t much of a selling point in 2020; it’s not something you can feature in a trailer or on the back of the box. It goes a long way in delivering a sim experience though, and that’s what’s important.