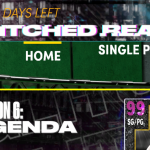 We’re at midcourt, and the ball is about to go up…it’s Monday Tip-Off! Start your week here at the NLSC with a feature that’s dedicated to opinions, commentary, and other fun stuff related to NBA Live, NBA 2K, and other basketball video games. This week, I’m tipping things off with some thoughts on the new Seasons approach adopted in NBA 2K21’s MyTEAM.

One of the major changes in NBA 2K21’s MyTEAM was the adoption of Seasons. For those unfamiliar with the concept, MyTEAM Seasons run for about six weeks, with each Season featuring its own theme, content, and Challenges. While modes of play such as Domination remain unaffected by Seasons, and Triple Threat Offline simply gains new rewards as each new Season begins, Season-based content such as The Agenda has a time limit. If you have any unfinished business on The Agenda by the time a new Season begins, too bad; it’s a new day in MyTEAM.

The Seasons approach is not unique to MyTEAM and NBA 2K, of course. It’s a form of the “games as a service” model that mobile and Triple-A games alike are using with ever-increasing frequency, which invites cynicism because of the way those mechanics utilise FOMO to push microtransactions, season passes, and so on. Less cynically, however, it’s a way to keep content fresh and not overwhelm late adopters with an overabundance of content. I’m generally in favour of Seasons in MyTEAM, but I do have a few criticisms and concerns that I’d like to discuss. Along with a few other aspects of the mode, the approach could be even better in NBA 2K22.

Fresh content is obviously the name of the game in modes like MyTEAM, and the Seasons approach has proven to be an effective means of delivering it. More to the point however, it’s provided a platform to make use of that content. The Agenda provides incentive to use cards that would normally gather metaphorical dust sitting in my collection. Of course, it’s also a means of encouraging us to buy packs, but one can resist that pressure if you’re really committed to “no money spent“. There’s always something new to do every day, and over the course of a Season, a variety of goals and challenges are added to keep things interesting. For the most part, it’s well done. 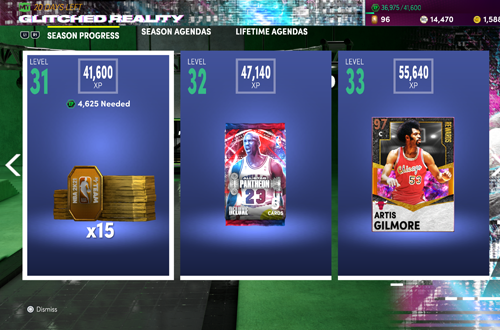 I do have a few gripes, though. Aside from my general distaste for any attempts to pressure gamers into spending, items on The Agenda aren’t always a good fit for one’s preferred mode of play within MyTEAM. For example, if you’re unwilling to play the online modes, you’ll find yourself essentially locked out of a lot of XP. Considering that MyTEAM online is plagued by similar issues to MyCAREER’s connected modes – a lack of proper matchmaking, cheesy play, pay-for-advantage mechanics, and lag spikes – it can be an unpleasant slog to earn XP for those tasks. On PC, finding an online game can be close to impossible, depending on whereabouts you live.

My suggestion here would be an option to substitute an equally challenging offline task, as with the daily challenges in NBA 2K Playgrounds 2. And yes, this goes for strictly online gamers as well. If offline isn’t your bag, I imagine the prospect of a long grind against CPU opponents is similarly unappealing. The ability to swap out an Agenda task for one involving a mode of play that’s more your speed would go a long way in making the mode more enjoyable and accessible. Sure, the current approach can be an incentive to give other modes a try, but if you’re set in your ways – or have tried those modes and don’t care for them – it’s a bummer to see certain tasks appear.

I’m definitely a fan of how Triple Threat Offline has been revamped by the Seasons approach in MyTEAM. The addition of a new set of games and rewards with each Season has ensured that the top prize evolves as more powerful cards are released. In previous games, the ultimate reward that was offered from launch was often quite underwhelming by the end of the year, when Galaxy Opal cards entered circulation. It’s also provided an opportunity for the MyTEAM producers to tweak rewards as the Seasons wear on, and although there’s room for improvement in that regard, there’s already a better framework in place compared to Triple Threat in previous games. 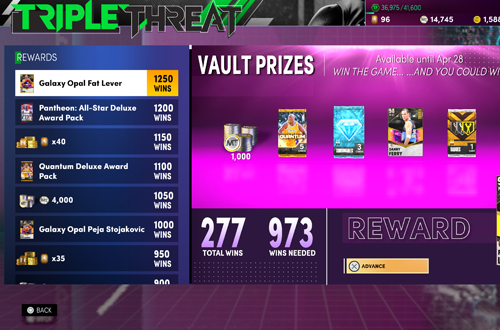 To that end though, the main problem with the rewards in Triple Threat Offline, and other modes of play within MyTEAM, is that they’re part of a broken economy. MT payouts in particular are laughably low considering the prices of packs, not to mention what top tier cards are selling for in the Auction House. When packs cost upwards of 10,000 MT, and cards are being sold for almost 30 million MT, a prize of 100 MT for hitting a certain level in Triple Threat Offline is insultingly useless. Even 1000 MT doesn’t account for the inflation that’s occurred in the Auction House. Payouts of Tokens and other prizes are similarly underwhelming after a few hundred wins.

As far as the Season Agenda and its levels are concerned, I like that progress is swift at first. You’ll find yourself at Level 10 or so very quickly, which is enough to pick up some of the early rewards, including a couple of cards that have their own challenges. There’s a sharp incline once you pass Level 20 or so, at which point any tasks that earn 100 or 200 XP feel useless. It does make the mode into a grind, especially as there’s a ticking clock before a new Season begins and everything starts over. Again, there are underwhelming prizes, such as Badge and Shoe packs. The prize board is a good idea, but it doesn’t scale, retaining rather useless 100 MT and 1 Token rewards.

Lousy prizes, along with a lengthy grind due to low XP tasks and a steep incline in progression, do detract from the experience somewhat. With that being said, the underlying premise is solid. The cards that you pick up during a Season add fun tasks to The Agenda, and are often quite useful players to have in general. Even if you don’t complete all of their tasks before a Season is over, there’s a good chance you’ll want to play with them again somewhere down the line. I admire gamers that have both the patience and dedication to complete a Season Agenda, but I’ve found that I usually tap out around Level 33 or so. Nevertheless, I have still enjoyed that experience so far. 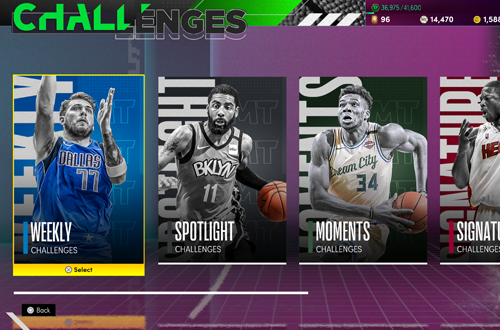 I’ve got mixed feelings about the Challenges disappearing at the start of each new Season. Obviously that’s part of the approach, and it does ensure fresh content. As I noted before, it also avoids overwhelming gamers with too much content if they don’t immediately jump into MyTEAM at launch. One of the many issues I had with NBA Live 19’s Ultimate Team was that after a few months, it felt like there was too much content with too little variety, and I had no desire to catch up on it all. While FOMO can be exploited to push recurrent revenue mechanics, it’s arguably preferable to being overwhelmed. It’s certainly preferable to keep a mode fresh and welcoming.

However, previous games have made a point of keeping Challenges up all year long, ensuring that you don’t miss out on content. Of course, MyTEAM Seasons are a new approach, so we have to expect some changes in that regard. I do believe that it works well for the most part, and while the approach does demand dedication, that’s perfect for gamers who are ready, willing, and able to sink hours upon hours into MyTEAM. As I said, I’ve still had fun playing it more casually and reaching levels in the early 30s, picking up some good cards along the way. The rewards could be better, but there’s no gatekeeping. At the same time, truly dedicated gamers are rewarded.

Moving forward, the MyTEAM Seasons model appears as though it will be beneficial to both 2K and basketball gamers. As always, I’m not a fan of the way the mode sets certain goals and exploits FOMO in an attempt to push microtransactions, but it is possible to have a good time without succumbing to that pressure (especially if you mostly play offline as I do). However, I appreciate how it facilitates new content, and incentive to use cards that I’d probably otherwise ignore. A savvy, patient gamer can easily have a “no money spent” experience in MyTEAM, and the variety of modes of play can keep everyone entertained. In my view, it’s an approach that should be kept. 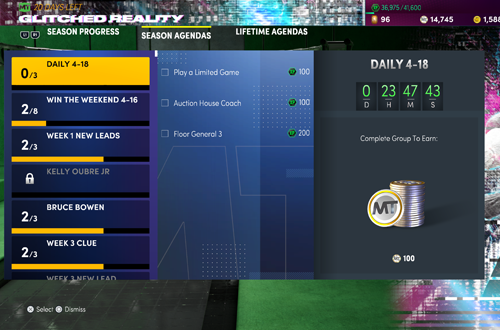 I’d absolutely advocate fixing the economy in MyTEAM, though. Something has to be done about low MT and Token payouts; especially MT. Rewards in general also need to scale much better. Four or five Seasons in, flipping over a card on the prize board to reveal 100 MT or a single Token feels insulting in how useless of a reward it is. I’d also suggest slightly higher XP earnings, the ability to switch tasks for one more suitable to your preferred mode of play, and a steadier progression rate. It shouldn’t be too easy, but it shouldn’t be a painful grind either, nor should the rewards underwhelm as they too often do. The Lifetime Agendas also need to expand throughout the year.

All things considered though, the approach isn’t broken apart from the economy, and that would still be an issue even if Seasons hadn’t been adopted in MyTEAM. It remains to be seen how (or if) these issues will be addressed moving forward, but on the whole, I’m in favour of retaining MyTEAM Seasons. It should be an effective means of keeping content fresh through new themes and Challenges, and I imagine that it can be adapted and revamped as MyTEAM evolves in other ways. If the mode’s economy and rewards can be fixed and improved upon, it’ll address some nagging issues that are undoubtedly drawbacks, and make MyTEAM Seasons even better.