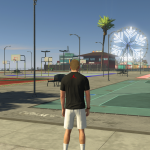 We’re at midcourt, and the ball is about to go up…it’s Monday Tip-Off! Start your week here at the NLSC with a feature that’s dedicated to opinions, commentary, and other fun stuff related to NBA Live, NBA 2K, and other basketball video games. This week, I’m tipping things off with – let’s be honest here – some griping about how after three months, 2K Beach has received three new skins, but no fixes for a major bug.

I’m sorry everyone, but I’m going to have to go back to being a grumpy old man to tip off this week. I’ve honestly been trying to look on the bright side after some critical pieces in recent weeks, and as I explained in Episode #352 of the NLSC Podcast, I’m actually feeling quite positive about NBA 2K21 Next Gen. I do still have concerns about the Current Gen version though, and since I believe in advocating for my fellow basketball gamers, it’s an issue I feel compelled to bring up again. Besides, sooner or later a similar issue will no doubt affect Next Gen, and 2K’s approach is troubling.

As I discussed in the aforementioned podcast, since NBA 2K21 Current Gen was released, it has received five patches and three skin/presentation updates for this year’s revamped Neighborhood, which goes by the name of 2K Beach. The latest patch was little more than a skin update, but previous patches have been more substantial. As with the previous title updates however, Patch 1.06 failed to fix the issue of the Daily Bonus not awarding the requisite amount of Virtual Currency upon completion. It speaks volumes about the level of care that’s going into the Current Gen version, and underscores a recurring (and shoddy) aspect of 2K’s approach to much-needed fixes.

MyCAREER gamers who have adopted a stance of No Money Spent have basically dedicated themselves to grinding for VC the long way. That means doing every little thing that you can to earn VC: playing the games, earning fans to collect endorsement payments, shooting around in MyCOURT between games, and spinning the Daily Prize wheel, hoping to land on a VC payout. Another reliable source of VC these past couple of years has been the Daily Bonus. This is a lump sum payout for performing randomly selected daily tasks, such as achieving a triple double, making five dunks, winning five online games, and scoring fifty baskets, to name just a few examples. 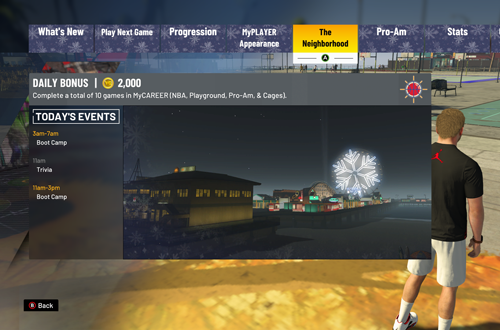 It isn’t a perfect system, as not all of the tasks will be suitable for all builds, or gamers who are exclusively offline or online players. You’ll most likely at least have a few attainable goals throughout any given week though, and it’s a good source of VC that eases the grind. That’s why it’s a major problem that it isn’t working in NBA 2K21 Current Gen. Oh, you can achieve the set task, and see it marked as completed in the Neighborhood menu. You’ll even see the notification pop up to let you know you’ve attained it. What you won’t see is any of the VC going into your wallet. Unlike a few of the other bugs that remain unfixed, there’s no workaround, and this one really hurts.

More to the point, it hurts because we’ve seen 2K rush to patch VC exploits, and even a couple of (in my opinion) fair farming techniques. They were also quick to drop the ban hammer on users who took advantage of a glitch on Next Gen, something that Ronnie 2K very unprofessionally giggled about on Twitter. That wasn’t surprising, and sadly, neither is 2K’s approach to the Daily Bonus issue. Look, it is absolutely fair that VC exploits are patched and gamers banned for violating the Terms of Service, though 2K’s bans have historically been too indiscriminate and inconsistent. I think most people understand that they’re looking out for their bottom line in that regard.

What bugs us is how 2K will conversely drag their feet when it comes to fixing an issue that affects the community; especially when it’s related to VC. Exploits are obviously patched because it protects their recurrent revenue, but with that in mind, when they fail to fix issues with VC earnings in a timely manner, it smacks of them hoping that they can force us to give in and buy VC to ease the grind. It’s completely lacking in fairness and goodwill, and our experience on the virtual hardwood suffers for it. As Jim Sterling has often pointed out, when a game is designed so that a large part of it can be skipped through microtransactions, it suggests it’s not worth playing. 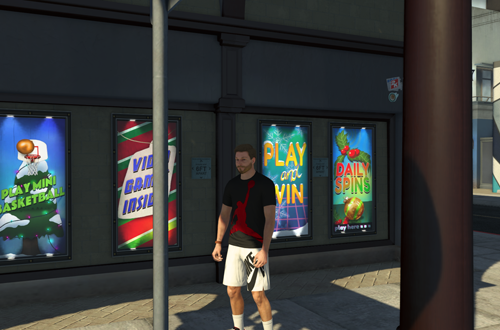 Again, this isn’t a surprise, but rather par for the course. When a leaked Locker Code made a Pink Diamond LeBron James card readily available to everyone in NBA 2K19 MyTEAM, they quickly and quietly removed it from everyone’s account on Christmas Day. Even though they were technically in the right, it was terrible optics. Not just because of the lack of goodwill in the covert way they went about it, but because it proved that if an issue affects them, they’ll even fix it on a holiday, while we have to wait weeks or even months for resolutions. I understand the rush to fix the Locker Code issue, but it’d be nice if they showed us at least half as much consideration.

The nerf to haircut prices in NBA 2K18 the previous year is a similar example. In their defense, they didn’t wait too long to push through that nerf, but the fact that they saw fit to drop prices to a flat rate of 100 VC rather than zero – something they could and should have done – was still a slap in the face. So it goes with their unwillingness to fix issues such as the Daily Bonus not working. Five patches in three months, three skins for 2K Beach, and no resolution to a major bug that is making the lengthy grind an even more tedious process. Echoing what I said on the NLSC Podcast, it simply isn’t good enough, and I wish that influencers would speak up about these issues.

I bring up the fact that 2K Beach has received three new skins because it highlights two important points here: 2K are pushing through new content for the Current Gen version of NBA 2K21, but are choosing to focus on cosmetic updates rather than bug fixes. The same could be said for new clothing items, which are frequently added to the shops in 2K Beach. You’d think that gamers might be more inclined to buy said clothes if they could earn VC quicker, which could be done if we had the Daily Bonus to help out. Of course, then we wouldn’t feel pressured to buy VC. And yes, buying VC is optional, but it’s clear which of those options 2K would prefer for us to pick. 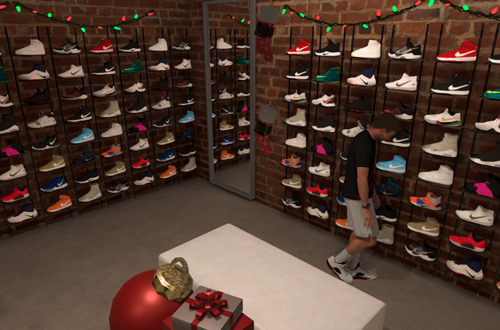 This is why I always push back on blaming gamers for microtransactions, as well as the suggestion that NBA 2K’s userbase is spoiled, whiny, or any of the other thought-terminating cliches that shills and apologists love to use. Yes, we do all need to take responsibility for our own spending habits, and sometimes those adjectives are apt for a vocal minority of the community, but it isn’t fair to tar us all with that brush. It also conveniently ignores that the games are designed in a way to put as much pressure as possible on us to spend. It’s bad enough when we’re nudged by psychological stimuli and a long grind. An unfixed bug that reduces our earning opportunities is just low.

One might argue “It’s Current Gen, who cares? Their focus is going to be on Next Gen at this point.” That’s true, but the Current Gen version of NBA 2K21 was still a full-priced release that carried the promise of post-release support. We are seeing post-release support, and it has amounted to content updates and technical fixes. However, it’s also seen three new skins for 2K Beach, yet no still fixes for a bug that needed to be resolved within the first couple of weeks. I can’t emphasise it too strongly: that simply isn’t acceptable. Of course Next Gen is going to be a priority, but that doesn’t excuse 2K continuing to drag their feet on ensuring that the Daily Bonus works.

Three months, three skins, no fixes for the Daily Bonus; that’s what we’re looking at. Given that not everybody can upgrade to Next Gen right now, not to mention the fact that the Current Gen version of NBA 2K21 is still a full-priced Triple-A game from a major developer and publisher, it’s not unreasonable to expect fixes like this to be made much earlier than three months after its release. It isn’t whining to be miffed. These are not issues to be met with an indifferent shrug, or accusations of petulance. If there was a workaround – even a contrived one – it’d still merely be tolerable, not acceptable. Three months, three skins, and no fixes, though? We need to speak up.

Every time I tune to Twitch to watch some virtual basketball games, there are 95+% of circus modes 2K streams: fake locations, pink balls, geared up with clothes avatars, cacophony) So I end up watching nothing. 🙂

Indeed. With that stuff being the focus, it’s not surprising key issues aren’t being resolved.