Monday Tip-Off: The Unexpected on the Virtual Hardwood 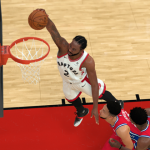 We’re at midcourt, and the ball is about to go up…it’s Monday Tip-Off! Start your week here at the NLSC with a feature that’s dedicated to opinions, commentary, and other fun stuff related to NBA Live, NBA 2K, and other basketball video games. This week, I’m tipping things off with a few thoughts on how it’s difficult to implement the realism of unexpected moments in basketball games, without them coming across as contrived.

It’s been quite an eventful twenty-four hours. With its final episode airing next week, Game of Thrones fans (of which I’m one) have experienced a major development that isn’t entirely unexpected, but unquestionably impactful (to say nothing of divisive). At the same time, two Game 7s concluded the second round of the 2019 NBA Playoffs. The Portland Trail Blazers defeated the Denver Nuggets in a close contest, while the series between the Toronto Raptors and Philadelphia 76ers was even more dramatic, ending on Kawhi Leonard’s incredible gamewinning shot.

While I’d normally advocate for letting the dust settle before we proclaim anyone or anything to be among the greatest ever, Leonard’s jumper that seemingly touched every part of the rim before dropping in has to be considered an instant classic. No matter what happens with the Raptors this year, that amazing shot that had everyone holding their breath has secured its place among the great gamewinning buckets in NBA Playoffs history. It’s the kind of excitement that we want to see in the real NBA and on the virtual hardwood alike, but it’s difficult to achieve the latter in a way that feels satisfactory. In video games, the reality of the unexpected often feels unrealistic.

Imagine if you experienced a shot like Kawhi Leonard’s gamewinner in NBA 2K or NBA Live. If you were the one attempting the shot, it would no doubt go down as one of your all-time favourite moments on the virtual hardwood. If you were the 76ers in that scenario, however, it would instead rank among your most frustrating moments. You’d likely feel cheated, having played tough defense and forced a difficult shot. The knee-jerk reaction would be to blame cheesy mechanics if you’re playing another user, or grumble about cheap AI if it’s the CPU. A lot of people made fun of Joel Embiid’s emotional reaction, but controllers would be thrown if it happened in 2K or Live. 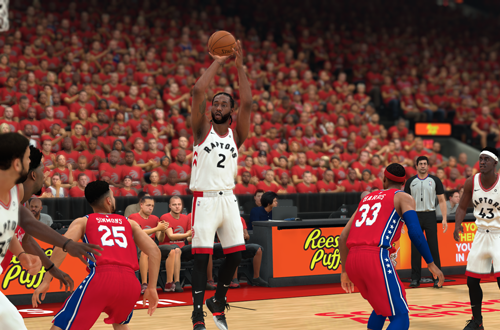 The frustration would be understandable, though. As much as we want to see those exciting and unexpected moments play out on the virtual hardwood, and as realistic as it would be to see them happen, it goes against our expectations as gamers. Look, we can agree with Da_Czar’s creed of “Don’t play video games; play basketball!” with every fibre of our being, as many of us still do despite changes in the demographic. They are video games though, and that means we expect to achieve good results through correct decisions and precise input. Being defeated by the unexpected is usually equated with bad game design, such as broken mechanics or contrived AI.

In the case of video games that are aiming to realistically depict a sport, replicating the unlikely and unexpected is actually part of that goal; at least, in theory. In practice, it can feel contrived. Gamers and developers alike have commented on a multitude of highlights over the years, suggesting that most people would throw a fit (and their controllers) if the same thing happened on the virtual hardwood. They have a point, and I’ve previously discussed how we’re not always willing to accept realism when it doesn’t favour us. The problem is that what’s rare and unlikely in real life can easily become commonplace in video games, at which point it does become unrealistic.

NBA players make some incredible shots at times, sometimes with some very lucky bounces as Kawhi Leonard demonstrated in Game 7. These amazing moments stick in our minds, to the point where we forget all the times that great players had a chance to win the game, but came up short. Sure, some missed shots and other blunders become memorable in their own right, but we tend to recall the triumphs. We think of Steve Kerr’s shot in Game 6 of the 1997 Finals, or Michael Jordan’s gamewinner a year later. Not much attention is given to Scottie Pippen’s steal, or John Stockton’s missed three, which came in the waning seconds following those two plays respectively. 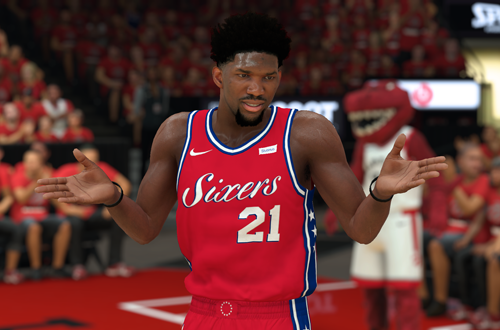 My point is that these historic moments are rare, and outnumbered by more mundane endings and moments where players come up short. To that end, if realism is the aim, then those moments have to be rare on the virtual hardwood as well. That’s why I don’t entirely agree when developers or gamers suggest that an incredible highlight justifies a similar scenario playing out in NBA 2K or NBA Live, as frequency and context are important. Then again, if we’re conditioned to think that anything that’s unexpected in an undesirable way is bad game design, could a moment like Kawhi’s shot ever actually occur without it feeling contrived and unfair for one side?

Consider the prospect of implementing bad calls and officiating errors in basketball video games. It’s an interesting idea, and it would inject a level of realism into the experience, but would it be viable? Putting aside the NBA’s likely objection, it would be a tough sell for some gamers as well. After all, it’s bad enough when we see an outcome affected by bad calls in real life, let alone on the virtual hardwood. Consider that games already have to be stacked against the user to ensure a challenge, and that recent releases already need to do a better job of masking those mechanics. With that in mind, it’s safe to say that some aspects of reality probably shouldn’t be emulated.

What this means is that NBA 2K and NBA Live need to devise ways of having these unexpected moments happen in ways that don’t feel contrived, and that’s a lot easier said than done. One might suggest that the AI’s comeback logic or a mechanic such as Takeover allowing players to hit all kinds of difficult shots to fuel an unlikely victory are examples of canned moments and contrived outcomes, but then we see real NBA games where players are trading big shots despite the best efforts of their defenders. They’re something that can happen on any given night, yet it’s hard to reflect that on the virtual hardwood without it feeling convenient, overpowered, or unfair. 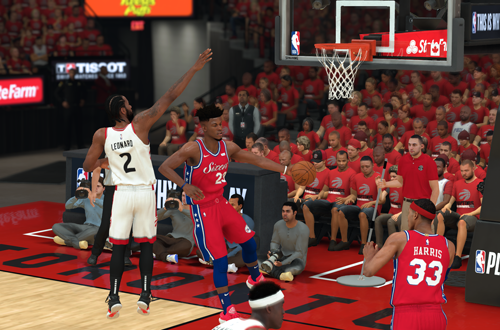 We want to see shots like Kawhi Leonard’s gamewinner in video games, but at the same time, we don’t want to see it. More accurately, we want to be able to pull it off, but hate the inevitable trade-off of possibly being on the other side of it. To draw a comparison to the aforementioned Game of Thrones, fans want to see twists and turns in the story, unexpected moments that are dramatic, and major characters killed off. Those same fans will complain if those developments don’t line up with any of their predictions and pet theories. We’ll claim that we want to be surprised and taken for a ride, and then declare it bad writing if it’s not the narrative that we wanted.

Of course, that doesn’t mean that there aren’t valid criticisms of the writing, just as the complaints about incredible shots on the virtual hardwood have merit. Being upset at the result because it isn’t what you wanted and having a valid point are not mutually exclusive. Honestly, I’m not sure which is more difficult: wrapping up a long-running series in a way that satisfies a majority of dedicated viewers, or successfully depicting the sometimes chaotic outcomes of basketball games in a way that doesn’t feel phony and unfair. From the outside looking in, and knowing how rabidly invested a fanbase can be, both endeavours are far from easy, but ultimately a necessity of their medium.

One way or another, Game of Thrones comes to an end next week, and that will be that; outside of the conclusion of A Song of Ice and Fire, of course. Basketball video games will continue to be developed, however, and the unexpected and spectacular need to be a part of the experience. As gamers, we need to be prepared to accept that they’ll happen both for us and to us. As for the developers, they need to ensure that there’s balance in the form of appropriate context and frequency. A greater amount of organic moments will bring more excitement to the virtual hardwood, but only if there is realism, and a willingness to take the good with the bad, expecting the unexpected.

Simple way to fix it is create a clutch meter that you build up during the game so you use it when the game is close. But the catch is do you wait to the end of the game to use it or do you use it to help catch up to give yourself an opportunity to have a shot at the end of the game and It should only be used for a higher rated players. Players like Isaac Bonga could not get it. The clutch meter would be for both offense and defensive players.

Definitely an interesting idea that could bring some balance. The thing is though, it still doesn’t account for the unexpected, such as a player who’s cold all game heating up quickly in the fourth quarter, or someone who hasn’t hit a shot all game coming up the gamewinner. A shot like Kawhi Leonard’s gamewinner that bounced four times before dropping in is always going to feel cheap, especially if it’s the CPU hitting it against us. On the other hand, it’s going to be exciting when we pull it off.

It’s tough to have that organic feel, not only from a programming aspect, but also in terms of our expectations of video games. We’re conditioned to expect to be rewarded (and ultimately beat the game) when we do everything right, or make the correct input and decisions more often than not. That’s how video games work, and the unpredictability of certain moments in sports are difficult to capture without feeling contrived. It’d be great if EA and 2K could find a way to do it, though.

That being said, a clutch meter or deeper clutch mechanic is definitely an idea worth considering. 🙂