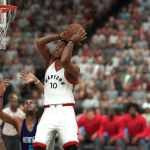 We’re at midcourt, and the ball is about to go up…it’s Monday Tip-Off! Start your week here at the NLSC with a feature that’s dedicated to opinions, commentary, and other fun stuff related to NBA Live, NBA 2K, and other basketball video games. This week, I’m tipping things off with a few thoughts on how my basketball gaming habits are more vanilla than they used to be.

Over the years, there are two initiatives within our community that have gone a long way in improving the basketball gaming experience after a title is released: modding, and slider tweaks. Mods have added missing content, created new experiences such as retro, college, and foreign league rosters, and attempted to fix issues with the games wherever possible. When it comes to refining the gameplay, devising the right slider adjustments has made a huge difference for many gamers. In short, few would say that playing the game as-is – vanilla basketball gaming, if you will – is optimal.

During my time as a content creator in the basketball gaming community, I’ve created roster mods, and I’ve devised sets of slider tweaks. I’ve also installed other people’s mods, and tried out their sliders. However, I have to admit that my basketball gaming habits have changed over the past decade or so, to the point where you might say that I’m playing a vanilla game. This isn’t because I don’t appreciate the hard work of our modding community, nor is it because I believe that games can’t be improved upon with slider tweaks. Rather, a combination of my preferred modes, primary platform, and even my content creation habits, have led to more vanilla basketball gaming.

If I had to name the chief cause of my vanilla basketball gaming habits, it’s easily my choice in modes. Back in NBA 2K13, I became hooked on MyCAREER. Going back to my earliest memories of playing sim basketball titles, I was always playing Season mode, and when they came along, Franchise and Dynasty. I was intrigued by the My Player experience in NBA 2K12 when I played it in order to write a comprehensive review of the game, and although I didn’t keep playing the mode that year, the newly renamed MyCAREER in NBA 2K13 drew me in. It was something fresh with new goals to aim for, and the RPG aspects appealed to me. And so, I left franchise behind. 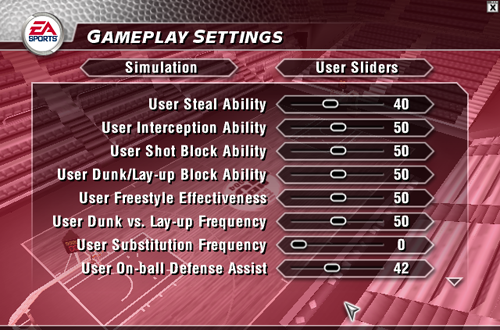 In many respects, MyCAREER is a curated mode. Customisation is limited to your player rather than the gameplay experience, at least beyond changing the difficulty or quarter lengths. By default, custom rosters aren’t usable. Slider adjustments aren’t allowed, so as to preserve an intended style of play. Limiting our control over the game is a core aspect of career modes, centring focus on our avatar and challenging us to work within those limitations. The downside is that any issues that could feasibly be corrected via slider adjustments or custom rosters can’t be addressed. Outside of official patches that provide tweaks and tuning, MyCAREER gameplay is what it is.

As such, spending years with MyCAREER has led to me playing without making any of the adjustments that I once might have. Although NBA Live 2004, 2005, and 06 are all very good games out of the box, I enjoyed them even more after I’d adjusted the sliders to accomplish a level of realism that I preferred. Over the past decade, I would say that most NBA 2K releases are better tuned by default, though obviously not to everyone’s satisfaction. Many years ago, I’d probably be among the people who suggest custom sliders to the community. It’s not something I’ve been able to dabble with while focusing on MyCAREER, though; for my benefit, or anyone else’s.

My interest in the online team play scene – piqued when a handful of us created an official NLSC Pro-Am squad in NBA 2K16 – did little to curb my vanilla basketball gaming habits. There’s no way to customise the online gameplay experience, and playing with altered settings wouldn’t be adequate practice for the competitive scene. My attention was therefore focused on grinding up a player that would be capable of performing well in MyCAREER’s connected modes, and also be fun to use in NBA games. It left little time to experiment with the more traditional 5v5 offline gameplay, and devise a set of sliders that I both enjoyed and felt could be beneficial to others. 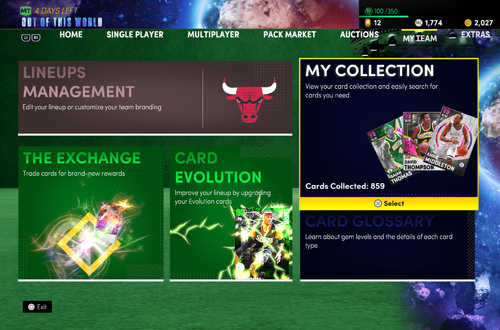 The other mode that I’ve mostly been playing as of NBA 2K21 is MyTEAM, which likewise offers no slider customisation. In short, it’s been a long time since my mode of choice has even provided the option to mess around with sliders. When I think back though, these vanilla basketball gaming habits predate my interest in MyCAREER, its connected modes, and MyTEAM. It’s undoubtedly led to me playing games as-is for the past decade or so, but even before that I was accepting the gameplay I was given, so to speak. I developed these habits playing the Xbox 360/PlayStation 3 generation of NBA Live titles, as I recall barely ever bothering to make slider adjustments.

I can ascribe some of this to not spending as much time with those games, opting to continue playing an updated NBA Live 06 PC instead. At the time we were still very focused on modding the PC releases of NBA Live, and then the early PC versions of NBA 2K. Most of our Forum discussion revolved around the PC version, so there was less interest – and therefore, less incentive – in devising custom sliders for the seventh generation NBA Live games. Seeing as I didn’t spend as much time with those games when they were new, my own gaming habits didn’t provide any personal incentive to experiment. I have of course since developed a greater appreciation for those titles.

Ironically, I’ve ended up spending more time playing recent games on a console, and that naturally contributed to opting for a comparatively vanilla experience. I’ve still purchased NBA 2K on PC over the past generation and spent time playing it solo, but playing MyCAREER and Pro-Am with friends on PlayStation 4 monopolised my gaming sessions. For this reason, I haven’t been as involved in modding as I once was, either as a creator or a user. I’ve continued to buy the PC version of NBA 2K while telling myself that I’d use it for mods; my own, and/or the community’s. Sadly, I’ve underutilised my copies of the PC version in that regard, and frankly, in general. 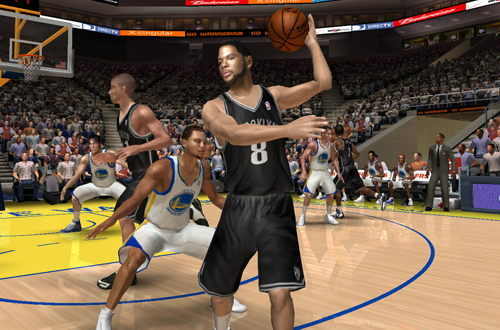 There’s another reason that I’ve generally avoided installing mods in my games over the past generation, and again, it has nothing to do with not wanting to support the modding community. With the launch of The Friday Five in 2013, and Wayback Wednesday and Monday Tip-Off in 2015, I’ve been focusing on creating different content. Instead of mods and sliders, I’ve written articles, and produced a few videos now and again. To that end, I’ve required screenshots and footage of the games. In order to accurately represent what I’m discussing in my commentary on basketball gaming – and to ensure focus on the issues – that media is always from a vanilla title.

That’s not to say that I haven’t installed mods. Sometimes that’s been useful or even necessary for an article, and I’ve also played with mods for my own enjoyment. I’ve also tried out some sliders here and there as well, though I haven’t been able to really benefit from them due to my aforementioned choice in modes. Of course, even when I was actively modding NBA Live back in the day, I had to be careful about which files I had installed. Naturally I had my own roster files in place along with all of the art files that they required, and mixing other mods in with them might have resulted in me redistributing something that I didn’t have permission to, or causing a conflict.

Do I regret adopting a more vanilla approach to basketball gaming? Yes and no. I enjoy creating the content that I’ve chiefly focused upon in recent years, but I also miss making rosters and sliders, and I know they were a large part of our appeal for a long time. For years I’ve wanted to return to my roots as a franchise gamer, and I’ve missed out on an experience that’s much deeper than the ones I used to enjoy in NBA Live’s Dynasty modes. At the same time, I’ve also had a lot of fun with MyCAREER and its connected experiences, as volatile and toxic as the latter can undoubtedly be. I’ve had too much fun on the virtual hardwood to feel too much anguish and regret. 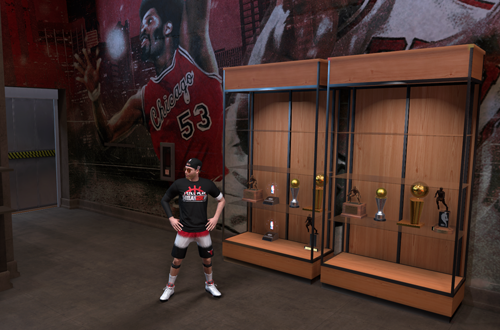 What’s interesting when I reflect on recent basketball games is how vanilla gaming has impacted my perspective of them. On one hand, I’ve had a more accurate view of the games’ issues and how they play, because I haven’t meddled with them too much. In contrast, I sometimes forget how games like NBA Live 06 PC play out of the box, as I’m accustomed to playing them with slider tweaks and mods. On the other hand, because I’ve opted for a vanilla basketball gaming experience in modes that are quite curated, it could be argued that I haven’t played those games to their full potential. I’ve just taken what I’ve been given, rather than truly trying to make the best of them.

Moving forward, I’d like to return to my roots; not just as a franchise gamer, but with slider creation as well. I’ve dabbled with modding here and there, and I’d like to go further with that. Even if I don’t undertake or contribute to any major projects myself, I’d like to spend more time enjoying the work that others have done. That’s not to say that I’ll be abandoning my articles, videos, or the NLSC Podcast. Obviously there are only 24 hours in a day to play games and create content, and like everyone else, I also have other responsibilities to take care of. Still, as I look to change up my basketball gaming habits, there’s an opportunity to have experiences that aren’t so vanilla.

With that being said, there’s nothing wrong with vanilla basketball gaming! As long as you’re enjoying your time on the virtual hardwood – however you choose to spend it – that’s the main thing. There’s a great deal of depth to modes like MyCAREER and MyTEAM that makes them enjoyable without the benefit of modded content, and mastering the gameplay experience that they offer is part of the challenge. I’ll always have an appreciation for those modes and will no doubt spend time with them in the future, but to keep things fresh, I’m now looking to how I used to play for inspiration. I’m ready to reintroduce flavours other than vanilla to my basketball gaming habits.