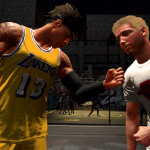 I remember the day I bought NBA Live 96 PC, which as I’ve mentioned before, is still one of my all-time favourite basketball games. One of my oldest friends happened to drop around, and was open to playing it. Now, this was 1996 and basketball was very popular, especially following Michael Jordan’s comeback the year before. Most of us had an interest in the sport to some extent, and I played basketball with my friends – including the one who came around that afternoon – just about every day at school. He definitely wasn’t as into basketball as I was, though. He wasn’t developing an interest in the sim games, or following the NBA very closely. He liked basketball; I loved it. 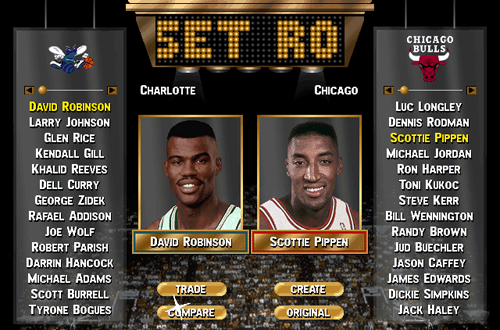 We were both avid gamers though, and he liked basketball enough to want to indulge in some virtual hooping. And so, we set up a game and got ready to play. However, he insisted on making a few trades before we began. My friend traded David Robinson to the Hornets and stacked them with a few other stars, while I created Michael Jordan and added him to the Bulls. I don’t recall the result of the game – there’s a good chance that he won with his stacked lineup – but I do remember feeling annoyed at the newly inaccurate lineups and restoring the default rosters after he went home, which also meant re-creating MJ from scratch. I preferred that to all of the inaccuracies, though.

At this point, you may wonder why we didn’t just use the custom teams. It was likely too obvious a solution for our young minds to consider, but we probably also wanted to play with the Bulls and Hornets, who were both very popular at the time (indeed, back then was difficult to find much NBA merch that wasn’t Bulls or Hornets here in Australia). In any event, it spotlighted a key difference between an avid and a casual basketball fan when it came to virtual hooping. I wanted to play with real rosters, real NBA teams. My friend wanted to play with a bunch of star players, without any regard for accuracy or realism. It was all about a fun fantasy scenario, and winning.

There’s nothing wrong with that, of course. As someone who has enjoyed franchise and career modes alike, there’s a lot of fun to be had creating your own reality. We all have a different threshold as to how far we want to bend reality though, and whether or not you’re a hardcore basketball/NBA fan is a factor there. When you’re virtual hooping with someone who has a more casual interest in the sport, those different philosophies will most likely result in one person having more fun than the other, if you can’t find some middle ground. Too much realism is a turn-off to the casual or non-fan, while too much silliness in a sim game is usually unappealing to hardcores. 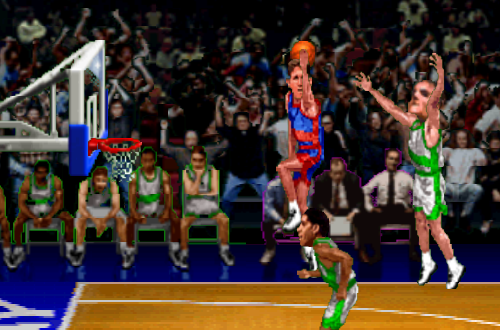 To that point, I also remember playing NBA Live 99 on Nintendo 64 with that same friend, and another good friend I’ve known for almost as long. As a compromise, we were playing arcade mode, which meant no fouls and everyone dunking as much as possible. I can recall feeling bored and frustrated at the repetitive and unrealistic nature of the game. Of course, part of that is because NBA Live’s arcade mode wasn’t as fun as a proper arcade title. I had a lot more fun playing NBA Jam Tournament Edition and NBA Hangtime with those same friends, because the style of gameplay was intended to appeal to both hardcore basketball fans and gamers in general.

That is the advantage of arcade basketball games, after all. As I mentioned, they’re pick up and play with a simplified approach to basketball, so they’re less frustrating for gamers who aren’t familiar with the sport. That also means less frustration for you, the dedicated hoop-head, as you won’t be explaining rules and more complex controls. The exaggerated action is something you can both enjoy. It’s enough like basketball to appeal to you, and enough like a regular video game to appeal to everyone else. Sim games are something we have to pick up at our own pace, whereas we can all stand a chance at being competitive immediately in well-made arcade titles like NBA Jam.

In fact, the more realistic and complex that the sim games have become, the less fun it is to play against someone who isn’t a fan when you know what you’re doing. It’s not a situation where mashing buttons will allow them to succeed through sheer dumb luck, so chances are you’ll be blowing them out very quickly. That isn’t fun for them, and they’re most likely going to start chucking up shots from half-court and fouling on every play just to feel like they’re doing something of consequence. I mean, gamers in The Rec do that, so I don’t blame the casual or non-fan for doing it when someone far more experienced with sim games is running all over them on the virtual hardwood. 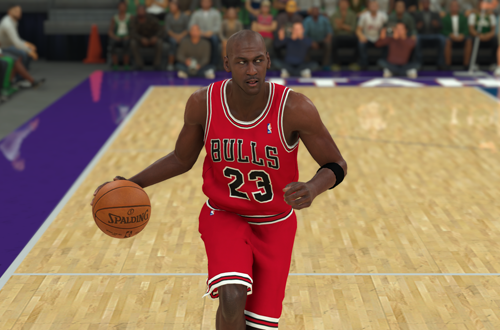 It’s why arcade titles are a better option, but even then there’s no guarantee that it’ll be a mutually satisfying experience. If you’re an avid basketball fan who has spent a lot of time virtual hooping, then chances are you’ll have a major advantage in a game like NBA Jam as well. Furthermore, you’ll probably find that the interest simply isn’t there. Going back to what I said in my introduction, we basketball gamers are more likely to be interested in other genres than fans of those genres are interested in virtual hooping. We basically make up most of the crossover demographic, along with a small percentage of gamers who are open to virtual hooping for a change of pace.

Those gamers do exist. Another friend of mine who isn’t particularly into basketball picked up NBA 2K20 on sale after watching The Last Dance, and told me that he’d been enjoying it, which was cool. Of course, I was also a bit envious that he could jump into basketball gaming with fresh eyes, and without the same frustration that comes with long-standing legacy issues and wanting certain aspects of the games to be better. If there’s an advantage that casual and non-fans have when it comes to virtual hooping, it’s that they aren’t as obsessively critical as we can be. That’s not to say we shouldn’t be critical, of course, but it’s a burden that casual fans don’t share.

More cynically, I do wonder what the demographics of NBA 2K look like these days as far as hardcore fans are concerned. Obviously dedicated basketball fans play NBA 2K, but the series is aiming for a broader appeal in recent years, seeking to compete with titles like Fortnite and Call of Duty in lieu of strong (and consistent) competition in the basketball gaming space. With the popularity of The Playground and the other connected modes in MyCAREER, less attention to detail in the official rosters, and OP cards dumbing down MyTEAM, it seems like NBA 2K is trying to appeal more to the casual fans and competitive online gamers, rather than enthusiastic hoop-heads. 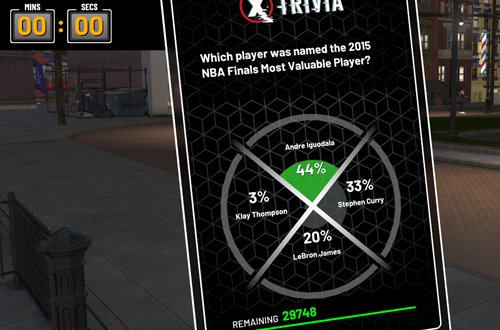 Indeed, when I was taking part in the daily trivia in NBA 2K19 in an attempt to boost my VC earnings in MyCAREER, I noticed that questions about pop culture tended to be answered correctly, while NBA-related questions – including very easy common knowledge ones, and even those about recent history – eliminated a large percentage of the participants. Sure, it’s easy enough to draw a blank or get mixed up when you play trivia, or even hit the wrong button and inadvertently answer incorrectly. Still, it suggests to me that a large part of the demographic doesn’t really watch the NBA or basketball, meaning that their virtual hooping isn’t an extension of a love of the sport.

While that has some drawbacks for sim heads and hardcore basketball fans, it isn’t something to get all up in arms about. There’s already too much gatekeeping in basketball gaming as it is. As someone who loves basketball, it’s cool to see people develop an affinity for it, and be drawn into virtual hooping. With your friends who aren’t really into the sport, though? I’d suggest meeting them halfway with a more casual experience if they’re open to hitting the virtual hardwood with you. More than likely, though, you’ll be better off opting for a genre where you’re on a level playing field, with gameplay that you can all enjoy regardless of your sporting interests.