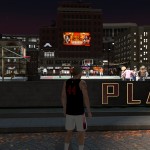 We’re at midcourt, and the ball is about to go up…it’s Monday Tip-Off! Start your week here at the NLSC with a feature that’s dedicated to opinions, commentary, and other fun stuff related to NBA Live, NBA 2K, and other basketball video games. This week, I’m tipping things off with an outline of why it’s important that future NBA 2K games implement proper matchmaking.

When NBA Live 08 implemented Online Team Play post-release, we were seeing the future of online basketball gaming. Although subsequent NBA Live titles would build upon that first iteration of the concept, it’s ultimately been NBA 2K that has taken the experience to new heights. The idea of creating your own player and joining up with other gamers to play multiplayer games where every player is user-controlled has become the most popular experience in NBA 2K. It’s even led to the founding of a professional eSports league, run in conjunction with the NBA itself.

Given the popularity that online play now enjoys, it’s both puzzling and disappointing that NBA 2K is lacking such a critical component of the experience: matchmaking. It’s kind of implemented in that there’s a rep system (albeit one that’s problematic), position logic behind teaming up players in the Rec Center, and a rough ranking system in team Pro-Am. However, it’s nowhere near as deep or effective as it needs to be, and in the case of The Playground, it’s completely non-existent. Simply put, if NBA 2K is going to cater to its large paying audience and establish a respectable competitive scene, it needs to have proper matchmaking.

Although I’ll be focusing on how it affects MyCAREER’s modes, matchmaking is also a must for MyTEAM and Play Now Online. With that being said, let’s look at how online team play works in the connected modes. The Playground’s streetball environment involves lining up at the Got Next spots, either with friends or randoms. The Rec Center is the walk-on version of Pro-Am, featuring games with NBA rules and five minute quarters. You enter the locker room (with or without friends) and wait for your squad and the opposing team to be filled. Team Pro-Am is for organised squads, and has now basically become the home version of the NBA 2K League. 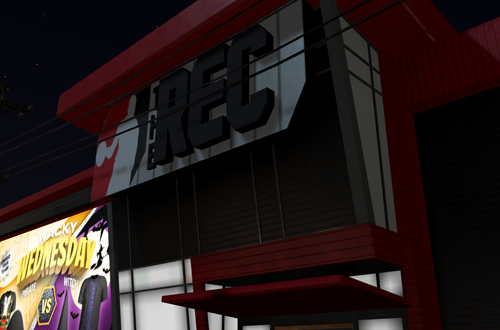 This is all fairly straightforward, and offers up three distinct options: streetball games, NBA-style pick-up games with makeshift squads, and organised competitive play with NBA rules. Those basic concepts are fine, but they’re problematic in their current form, and a lack of matchmaking has a lot to do with that. Using The Neighborhood as a hub and de facto matchmaking system, all three modes throw players of varying experience and skill levels in together. Add the fact that it’s necessary to grind up your MyPLAYER from 60 Overall and unlock Badges in order to be competitive, and that it’s possible to pay to upgrade ratings quicker, and you end up with a lack of balance.

It’s probably as good a time as any to address the “get good” argument that’s almost always thrown out when you bring this up. I’ve seen so many attempts to deflect any criticism of the lack of matchmaking with this argument, and it’s completely asinine. The way that one “gets good” is to face opponents of a similar skill level. I do see the point about “sink or swim”, but it’s not an effective method of learning for everyone. Ranking and grading is a basic component of competitive sports right from the junior level, and even some professional leagues do it. More to the point, other video games with a competitive scene, like Rocket League, utilise ranking and matchmaking.

Everyone is new to the scene at some point, and to that end, online modes in NBA 2K should be welcoming by allowing gamers to learn at their pace and rank up to face tougher competition as they improve. Again, this is how Rocket League does it, so it’s not unprecedented. Rocket League also provides both casual and competitive settings, which makes its online play far more accessible. Forcing less skilled and experienced gamers with underpowered players to take on veterans with maxed-out avatars is far more likely to turn them away from the mode, because it sends the message that it’s only for the elite. NBA 2K’s online modes should not engage in such gatekeeping. 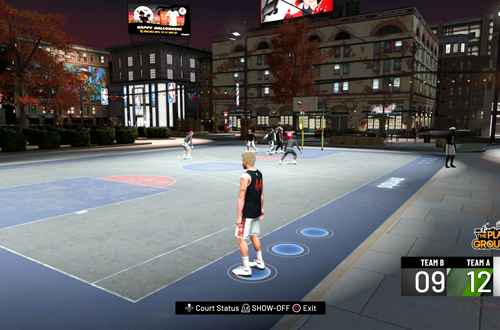 Furthermore, even if we were to entertain the idea that going up against elite players is the best way to learn, there’s a problem with that approach: elite players don’t want to play with newbies. It’s not uncommon for players to back out of the locker room in the Rec Center or hop off from Got Next after taking out their phones and checking their potential teammates’ win-loss record. While it’s certainly understandable that an experienced player may not want to play with a newbie, this creates a Catch-22: you need to be elite for people to want to play with you, but you need to play in order to become an elite player. With proper matchmaking, you avoid such scenarios.

I also want to put this out there. For all the gatekeeping, for all the elitist posturing and snide suggestions to “get good”, elite players are quite happy to be matched up against less experienced players. After all, more often than not, it’s an easy win to pad their numbers. You would think that such elite players would want to take on others at their level to prove how good they are…then again, maybe not. It’s not surprising, of course. In video games, as in life, if the system benefits you then you’re not going to complain. Everyone else is just whining because they can’t cut it, right? The system works for you and you’re happy, so obviously it doesn’t have any real problems!

That brings us to the current approach to team Pro-Am. In NBA 2K19, a change was made to team Pro-Am as it now requires a complete team of five users in order to start a game. It’s something that makes it more like the NBA 2K League, and given that not everyone likes playing against AI players, I understand the reasoning. It has amounted to gatekeeping though, only taking the preferences of a portion of the userbase into account. Contrary to popular belief, few people want to play with and against AI players online – let’s nip that snarky “go play MyCAREER!” nonsense in the bud right here – but it’s preferable to not being able to play any team Pro-Am games at all. 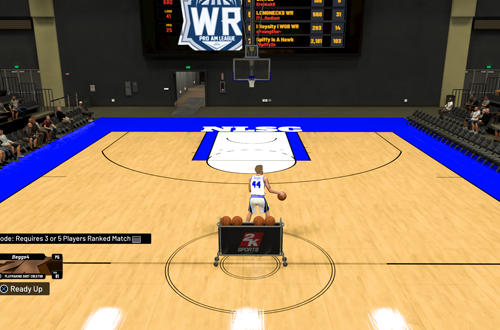 The NLSC squad had a lot of fun games in NBA 2K17 playing with just three of us, usually against squads of three or four on the other side. Granted, we’re playing on the Australasian servers and the smaller userbase in the region meant that AI players had to fill in more often, but the point is that it allowed us to get games, and fun ones at that. It wasn’t our first choice, but it was a fallback for us – and clearly many others – when one or two people couldn’t make a session. And yes, walk-on/the Rec Center is there to be an alternative to team Pro-Am, but given the problems and overall quality of that mode, it’s not the most appealing or viable option for a lot of Pro-Am gamers.

Once again, these are problems that can be solved by proper matchmaking. Allow gamers to specify whether or not they want to partake in games with AI players in their Pro-Am team matchmaking options, or only ever match up full squads against other full squads. It might be a disaster, but following Rocket League’s example of selecting overseas servers to find games and opponents would also expand the field; at the risk of increased latency of course. Also, although there is a tier system in team Pro-Am, it doesn’t work very well. It’s been opened up to allow teams to get more games, but that has resulted in elite squads getting to feast on newcomers too often.

Issues with team Pro-Am have ended up affecting walk-on/Rec Center as well. It’s not uncommon to see organised squads heading to the Rec to take on squads of randoms in order to pad their records, avoid stiffer competition, or because they simply can’t get a game in team Pro-Am. It’s only added to the toxicity of the walk-on experience, where people get selfish, freeze out other players, and would rather not play at all than play with someone who isn’t as experienced as them. Once again, it creates a scenario that demands everyone be elite in order to play, without actually providing a chance to play and hone their skills in order to reach that level. 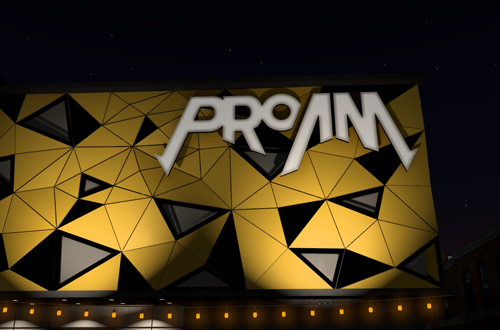 Proper matchmaking has the potential to alleviate so many problems. Unfortunately NBA 2K has cultivated a rather toxic atmosphere with its online play in recent years, and matchmaking alone won’t completely abolish that, but it will help. If gamers are on servers with other gamers of similar experience and skill level – there are plenty of metrics that can decide that fairly – then there’s going to be less hopping off Got Next in The Playground. People are going to squad up in the Rec, because they want to play and get experience. However you feel about AI players in team Pro-Am, you can have the experience you want because the matchmaking options and logic will exist.

The framework is there for NBA 2K to have a great competitive online scene. Sadly, the game has continued down the path that this Reddit post feared it would after all the issues in NBA 2K18. There are race cars in The Neighborhood now, but still no solution to the elitism and lack of balance in The Playground. The Rec Center got a new look for NBA 2K20, but no matchmaking. Team Pro-Am isn’t the inviting and welcoming mode it once was, and its problems end up affecting the Rec as well. The online experience has suffered, and the scene has become more toxic than ever. It’s frustrating when the online modes are such great concepts and should be a lot of fun.

And it’s even more frustrating when there is an obvious solution to these problems. Instead, we have a rep system that invites snobbery, facilitated by the way games are set up. We’ve got an online team play mode that used to be open to everyone, but now only caters to the preference of a portion of the userbase. The alternative to team Pro-Am is a frustrating experience. Gamers are expected to “get good”, but aren’t given the proper opportunity to do so. Elitism reigns because it’s actively encouraged. It may not fit the plan of pushing for more and more recurrent revenue, but if NBA 2K online is to be as good as it possibly can be, then matchmaking is a must.