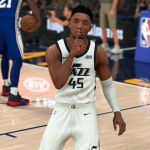 We’re at midcourt, and the ball is about to go up…it’s Monday Tip-Off! Start your week here at the NLSC with a feature that’s dedicated to opinions, commentary, and other fun stuff related to NBA Live, NBA 2K, and other basketball video games. This week, I’m tipping things off with a discussion of why we defend games, to the point where we downplay issues and even pretend that they don’t exist.

This is a difficult topic to broach without sounding snobby, or as though I’m accusing anyone who likes something that I dislike of being ignorant, easily pleased, or a shill. That line of thinking is just as toxic and unconstructive as fanboyism and shilling, and equally fallacious. We all have different tastes and expectations, as well as thresholds of satisfaction and disappointment. When someone sees fit to defend games that they enjoy, there isn’t necessarily anything pretend about it. Those are their honest feelings about the game, and genuine reasons for their enjoyment.

And yet, there are times that we do pretend when we defend games. We’ve all done it at some point. It doesn’t always mean that we don’t enjoy them, but to a certain extent we’re lying – both to others and to ourselves – about a game’s overall quality (or lack thereof). In the most extreme cases, it is indeed shilling for a title, or at the very least fanboyism polluting the discourse. However, there are innocent and understandable reasons that we attempt to pretend that everything’s fine and defend games; even when there’s no drawback to being critical (or indeed, it would actually benefit us to speak out on the issues). Unfortunately, they make it difficult to curb the habit.

As I said, we’ve all done this at some point, and I’m not so proud that I won’t admit to it myself. With that in mind, it’s time for another story! In mid-1999, I was looking forward to WWF Attitude on Nintendo 64. WWF War Zone was very outdated by that point, and I was eager to play a new WWF title with updated rosters. I remember eagerly reading the previews and viewing all the screenshots. It sounded like it was going to be a significant upgrade on War Zone. The previews promised customisable gear and stables, wrestlers wearing the title belts to the ring, and deeper modes. I even dreamt about going to the store to buy it, only to be disappointed when I woke up! 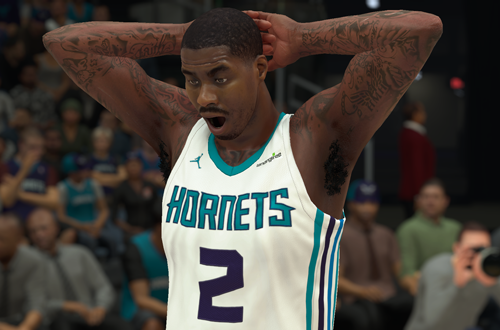 Perhaps that was an omen, as WWF Attitude is the first game that I remember really looking forward to, and feeling really let down by. I’d been disappointed by games before, but they were usually video store rentals, or ones I’d traded in for at my local games store and was quick to trade back for something else. This was a game where I’d followed the previews and built up my expectations. Then, when the day finally came…well, if you’ve ever played WWF Attitude, you know. The features that were promised were missing, or not as advertised. The gameplay wasn’t as good as the WCW games by AKI/THQ, who would eventually take over the WWF/WWE games.

Later that day, my parents asked me how I was enjoying my new game. I lied and said it was great, that I was having a blast. I didn’t want to say that a game I’d saved up for didn’t feel like a worthwhile purchase, and risk being chided for wasting my money. I also didn’t want to admit that I’d felt cheated by the previews, and that I wasn’t hooked by a game that I’d envisioned playing for hours on end. I did end up spending a good amount of time with WWF Attitude, but it wasn’t until much later that I could admit to myself, let alone others, that it was a particularly disappointing release. Even if I didn’t actively defend it, I still tried to pretend that it was much better than it was.

There have been times when I’ve felt a similar urge to defend basketball games and pretend that everything’s fine, or that they’re better than they really are. I’ve already touched on a couple of the reasons. The first is money. We don’t want to feel like we’ve been swindled, so we pretend that we’re satisfied and defend games as being a satisfying purchase. There’s an element of the sunk cost fallacy here, as instead of just cutting our losses or making peace with a game being disappointing, we dig in our heels to justify our monetary and emotional investment. Incidentally, newer games with recurrent revenue mechanics prey on this instinct in order to get us to spend. 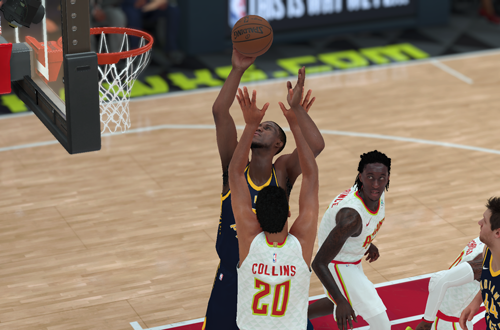 Pride is also a factor here. No one likes to admit they were duped by advertising and previews. We all like to think of ourselves as savvy consumers that know our hobby, and the notion that we’ve fallen for carefully produced previews and marketing spin is a blow to our ego. Just as I didn’t want to admit that I’d been let down by previews of WWF Attitude back in 1999, there are many people in recent years who will defend games and pretend that they weren’t sold a bill of goods by developer blogs, hands-on previews, and other pre-release marketing that wasn’t entirely honest (or just promised more than could be delivered on). In short, no one wants to look like they’re a sucker.

We also want to give games a chance. This does go hand-in-hand with our investment of money and anticipation, but there are times when great games fail to make a good first impression. Maybe we envisioned them being a little different based on how they were portrayed in previews, or maybe there’s a learning curve that’s frustrating at first but very enjoyable once you get the knack of it. It’s wise to avoid or reconsider knee-jerk reactions, and give games a proper chance so that you may develop an informed and reasonable opinion of them. Of course, some games still do present major issues after being given a fair chance, yet some people pretend otherwise and defend them.

The toxicity of online culture is also to blame here. A large part of online discourse is based around the triumph of the “gotcha”: taking joy in someone getting dunked on, and called out for failure. Doubling down on ignorance and errors is considered to be a sign of strength and even honour, while admitting to being wrong is looked upon as being weak. It should be the other way around, but that’s not how performative debate works. Online discourse also has an odd relationship with criticism and negativity. It’s both intellectually superior to criticise, yet negative remarks are also often dismissed as “whining”. It comes down to who’s offering up the criticism: you, or someone else. 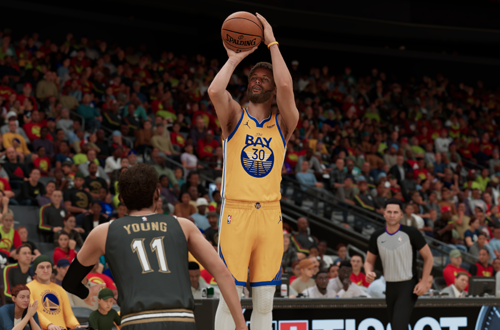 Admitting that you placed too much trust in a developer blog and trailer, only to end up being disappointed by the latest basketball game, will draw predictable responses. How could you be so naive and foolish? Haven’t you played other recent games? Did you think a Triple-A publisher wouldn’t spin, or outright lie in previews? Why should we feel sorry for you because you wasted your money? This line of thinking tends to portray the shortcomings of games as the fault of the people who bought them, rather than the company that publishes them. It shuts down conversation, leading gamers to internally pretend everything’s fine, and then disingenuously defend them publicly.

There’s also another interesting phenomenon that gamers of all genres don’t like to admit. Depending on the severity and nature of the issue, it’s actually possible to enjoy broken games and weird mechanics…if we’re good at them. Offering up an objective view of gameplay – or anything, for that matter- is basically impossible, because there’s no way one can feasibly appraise something without personal taste and opinion being a factor. With video games however, there’s a tendency to declare a game to be good because you’re good at it. To that end, anyone who has complaints about it simply isn’t good enough, and – as the saying goes – needs to “get good”.

This isn’t to say that that’s never the case, as the opposite often holds true. If we’re not good at a game and can’t beat it or win in multiplayer matches, we can certainly have a knee-jerk reaction of calling it bad. It wouldn’t be accurate to say that everyone who likes a game is wrong and only feels that way because they’re good at it, any more than it would be to say disliking a game is just an indication of being a poor player. It’s just that the former group is more likely to pretend a game has no problems or that there’s no valid criticism of the mechanics they like and are skilled at, and thus defend a game that undoubtedly has obvious flaws in addition to admittedly good ideas. 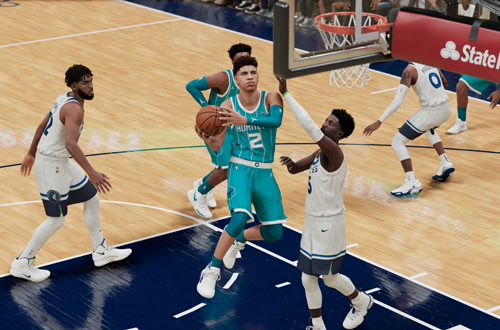 You can see this when gamers protest changes that would remove exploits, which is ironic as it means they’re sneering “get good”, while standing against making a game more skill-based! You can see it when gamers defend a new gameplay mechanic that they like, but it isn’t well-received by most people. Apparently, we’re supposed to pretend that basketball games haven’t ever had ideas for features that didn’t pan out! The aforementioned factors of sunk cost, pride, and a willingness to be open-minded are also at play here, and some gamers will genuinely like certain ideas despite their unpopularity. That’s fair enough, but dismissing all valid criticism is a step too far.

And yes, it should be noted that some influencers with a significant audience will defend games and pretend that the criticism is nothing but whining because they have to. If content creation has become your vocation, there are times when you’ll have to play ball if you want to keep the perks and access that help maintain your audience, and allow it to grow. Does this mean there’s some shilling going on? Absolutely, and I hate to see it because the games and the fanbase both ultimately suffer as a result. I know it sounds cynical and probably like sour grapes, but if an influencer is working closely with a publisher, I’m going to assume that they pretend when they defend.

While it’s distasteful and even harmful to the hobby, at least they’re getting paid for it. It’s part of the job description. As for the rest of us, we shouldn’t feel compelled to be dishonest if we truly feel disappointed and have well-reasoned criticism. It’s worth trying to make the best of a bad situation, and I’ve enjoyed games that are flawed. I won’t pretend that they don’t have their problems though, or defend them as brilliant. In short, let’s lose the stigma surrounding constructive criticism, and normalise honest discussions of games; positive and negative. As WWF Attitude taught me in 1999, pretending doesn’t make a flawed release better, or worth defending unconditionally.