We’re at midcourt, and the ball is about to go up…it’s Monday Tip-Off! Join me as I begin the week here at the NLSC with my opinions and commentary on basketball gaming topics, as well as tales of the fun I’ve been having on the virtual hardwood. This week, I’m tipping things off with some frank thoughts on how more is less when quantity outpaces quality in the content of basketball video games.

One of my recurring criticisms of NBA Live throughout the eighth generation – and it also applies to games in the seventh generation to some extent – is that they’re lacking in depth. Modes have been barebones (or “streamlined”, as promotional material likes to call it), and games have also been light on additional content and features compared to NBA 2K. While problems with NBA Live’s gameplay have ultimately been larger issues, the lack of depth unquestionably contributes to them being subpar. It’s felt like there’s been minimal effort beyond including the basics.

However, while NBA 2K can boast greater depth from its historical content to a wide variety of intricate modes, it has a recurring problem of its own. While there’s far more to the average NBA 2K release than just about any NBA Live game to date, not all of that content is well-made and of high quality. The lack of attention to detail in certain areas makes it seem as though content and features were added for the sake of padding the game and looking impressive at a glance, without implementing them properly. That may seem harsh, and it’s not my intention to imply that the developers aren’t working hard or don’t care. Still, without quality, more is undoubtedly less.

Let’s begin with the classic teams. I love that more retro content has been added over the years, and it was a great move to include some more unorthodox choices. Indeed, I’ve dedicated thirteen Friday Five articles to discussing new squads I’d like to see, some of which have since been added. I’d also much rather have that content in the game than not, as it facilitates many modding projects. With that being said, there’s no denying that there’s a severe lack of attention to detail when it comes to the retro teams. As much as I hate to use the word “lazy”, it feels apt. It’s impossible not to sound like I’m being insulting, but in places the efforts frankly feel quite sloppy. 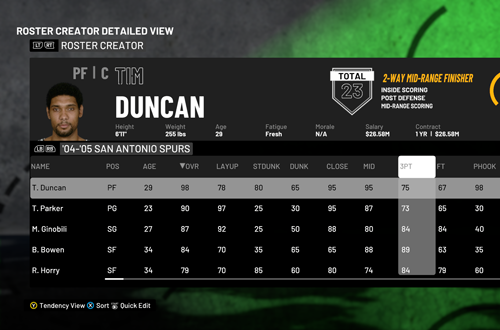 There are so many ratings, tendencies, and other attributes for historical players that are clearly copy and paste jobs. To cite a few broad examples, players who were well-known for posting up or spotting up for threes have tendencies that don’t reflect their style of play. Players who were extremely athletic have puzzlingly low speed and jumping ratings, making them unrealistically sluggish on the virtual hardwood. There are guards who played below the rim who have inappropriate dunk packages, among other ill-fitting animation assignments. It’s clear that some ratings were assigned according to a spreadsheet formula, completing ignoring context and/or reality.

In other words, yes, NBA 2K has a plethora of classic teams to play with, but thanks to all the inaccuracies, they don’t play like they should. As such, they’re much less fun to play with if you’re a history buff. Again, it’s better to have them in the game than not, but it’s an example of quantity over quality. There’s really no excuse for it either, as a majority of the classic teams have been in the game for years, so there’s been plenty of time to make corrections. Incidentally, many of these inaccuracies carry over to cards in MyTEAM, making players far less effective and fun to play with. Many historical players have been licensed, but they haven’t been done justice.

Then there are the placeholder players to fill out the rosters; Roster Players for the modern age. Their presence is understandable given that there are players that haven’t yet been licensed, but they highlight the lack of quality in the classic teams. Not only are they copy and paste jobs with identical faces and generic names that are re-used over and over again, but in some cases, they have better ratings than real historical players; that should never be the case! It further emphasises the lack of care when it comes to historical player ratings. Just add the teams and the necessary players, make sure the big names have accurate attributes – well, maybe – and then call it a day. 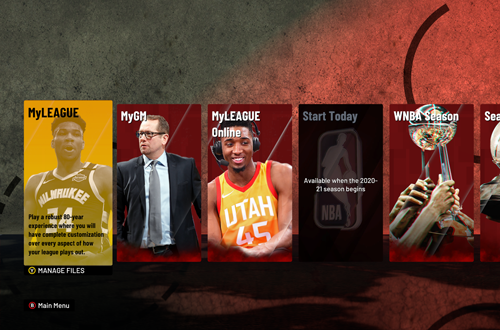 Unfortunately, this is something that’s been happening with NBA 2K for a long time, yet it flies under the radar. I’ve been working on a Missing Legends roster for NBA 2K10, in which I’m also correcting attributes and tendencies for the existing retro players. I’m making those corrections because after combing through their ratings, I noticed how many of them were clearly copied and pasted, without any regard for accuracy. Some of those Legends didn’t even have any tendency data assigned! It doesn’t matter that this is “bonus content” on top of the current rosters. Accuracy is still vital in a sim game. Besides, there are plenty of issues in the current rosters, too.

You’ll see this lack of quality in other areas as well. Pre-made historical Draft Classes were a welcome addition to franchise play, but they’re likewise lacking in quality and attention to detail. Not only are there inaccurate ratings, but several players are using their current/older faces, even when a younger face is already available. It may seem like I’m nitpicking, but it’s another example of having the opportunity to go the extra mile with accuracy, and instead deciding “Nah, good enough”. And look, I realise I’m being glib in saying that, but that’s honestly how it feels. The new content dazzles on first glance, but then you notice all the shortcomings. Again, it’s quantity over quality.

This issue also applies to features. “Start Today” is an excellent concept, and a great option to have when starting a new franchise game. Sadly, it’s been known to be quite buggy. The feature was present but inactive in NBA 2K21, which was understandable given that it came out before the 2020 season had concluded, owing to the pandemic halting play in March. 2K originally planned to get it up and running, but obviously ran into some technical difficulties. Again, that’s fine. It’s a different story when it comes to NBA 2K22, where “Start Today” stopped short at the Play-In Tournament. It’s not the first time that it hasn’t worked properly due to incorrect or buggy data. 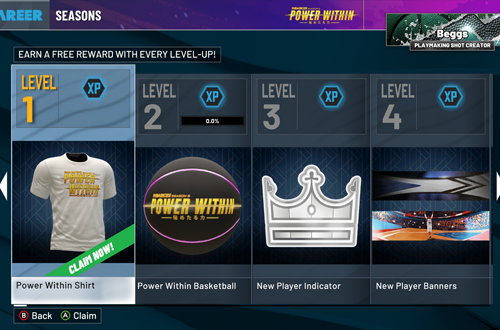 The league expansion and team re-branding features in NBA 2K’s franchise modes are likewise awesome, at least on paper. However, as of NBA 2K22, there are some bugs that lead to the new designs disappearing, requiring them to be redone. There have also been issues uploading images and getting them to appear in the game. Now, bugs are inevitable, and as with the historical content, it’s better to have these features in the game as opposed to being stuck with NBA Live’s “streamlined” offerings. They do lose their appeal when they’re not working properly though. NBA 2K is deep, but that depth feels artificial when content and features are lacking in overall quality.

We can also extend this criticism to the content and rewards systems in MyTEAM and MyCAREER. I’ve seen several gamers express frustration and disappointment with some of the seasonal rewards. Naturally, shills and fanboys have tried to shout them down and portray them as spoiled and ungrateful – that’s how shills and fanboys operate, after all – but it’s fair to question whether rewards are worth the grind. If they don’t feel fun or satisfying to attain, then it doesn’t matter that they’re free; the rewards system has failed as a concept if they aren’t rewarding! There’s quantity with plenty of content to unlock, but if the journey doesn’t feel worthwhile, then quality is an issue.

Incidentally, “without quality, more is less” is a mantra that should apply to modding as well. Needless to say, when it comes to fan-made projects that are freely distributed and official content in games that we pay for, expectations and any resulting criticism are somewhat different. At the same time though, if we’re going to criticise developers for cutting corners, then our projects should demonstrate more care. A retro roster, or a collection of retro season mods, lose some of their lustre if they’re similarly filled with copy and paste jobs, and a general lack of care and attention to detail. It’s better to release one well-crafted roster, rather than pump out a slew of sloppily-made ones. 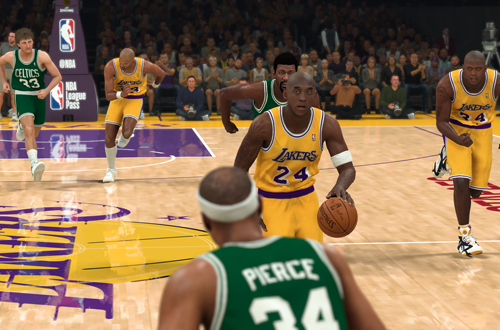 Of course, while quality over quantity is an approach to keep in mind when modding, it’s a much larger and more concerning issue with official content. As I noted, it’s a part of a product that we’re paying for, and these are often selling points during the preview season. Another example from NBA 2K22 is the addition of the actual PA announcers for every team. As you’d expect, this was a much-hyped feature, but from launch there have been issues with that audio, some of which still haven’t been fixed. The appeal and impact of such a landmark addition is undermined when it isn’t working properly. Again, no game is bug-free, but that doesn’t invalidate criticism.

Quantity over quality – be it a bevy of faulty features or content that’s been hastily slapped together – leaves us feeling that more is somehow less. Artificial depth makes a game seem bloated rather than jam-packed with fun. To that point, less can certainly be more when care is taken to maximise quality. Although there are benefits to having the current selection of classic teams, if the superfluous squads were trimmed and the remaining ones crafted with care and accuracy, NBA 2K’s historical content would be far more impressive. Resolving legacy issues with features and options, as well as problems with the team-specific PA Announcers, would make them more exciting.

As I’ve said on many occasions, and reiterated here, I don’t like the word “lazy”. It’s become a dismissive buzzword that’s thrown around way too easily. I know that there are passionate people on the NBA 2K development team that care about making the best game possible. However, when it comes to the historical content, it does feel as though there are quality control issues. When it comes to features, NBA 2K has a lot of meat on its bones, but at times it feels undercooked. It’s better than being barebones like NBA Live, but that’s damning NBA 2K with faint praise. Call it nitpicking, call it ungrateful, but these problems do affect quality. And without quality, more is less.