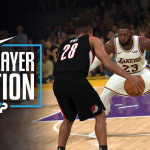 2K has posted a teaser of a new game mode in NBA 2K20, called MyPLAYER Nation. No further information is available at this time, but the mode will be tipping off alongside the 2020 NBA season on October 22nd.

As we await further details and the launch of NBA 2K20, the teaser certainly invites speculation. Based on the name and the teaser image, it seems a safe guess to say that it’s part of a connected MyCAREER experience. Common suggestions that I’ve seen so far include leaderboards and challenges, similar to what’s been implemented in MyGM. Whatever it entails, it likely involves some kind of content relevant to the real NBA, given that the mode launches with the start of the 2020 season.

It’s also worth noting that attendees of the NBA 2K20 Community Event have already seen the mode. A moderator over on the official NBA 2K Subreddit who attended the event has confirmed that it isn’t something completely new, such as an online co-op career. To that end, they’ve advised getting our hopes up too much with guesses that are completely wild.

More details will be coming soon, so I’ll follow up when they become available. In the meantime, feel free to speculate on what MyPLAYER Nation might entail in the comments section below, and join in the discussion here in the NBA 2K20 section of the NLSC Forum.