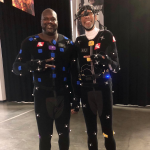 With June and the NBA Finals fast approaching, we’re inching closer to the preview season for NBA Live 19 and NBA 2K19. With NBA Live 19 having a presence at EA Play, we’ll likely hear some preliminary information, and perhaps even catch a glimpse of the game, within the next couple of weeks.

Conversely, Visual Concepts has traditionally held back on releasing previews, trailers, and information for NBA 2K until quite late in the preview season, so we may not hear much until July, or even August. Of course, the Legend Edition of NBA 2K18 featuring Shaquille O’Neal on the cover was announced in early May last year.

Speaking of The Diesel, it seems as though we’ve received a small nugget of information about NBA 2K19, as the official NBA 2K Twitter account recently shared a photo of Shaquille O’Neal and Kareem Abdul-Jabbar wearing motion capture suits. This would obviously suggest that the two Hall of Fame centres have recently participated in a mo-cap session for NBA 2K19. Shaq originally posted the photo here on his Instagram account.

Although new retro teams have been added in recent years, there has been a general feeling that 2K’s efforts with the historical content have been halfhearted at best. Several historical players were missing Badges at launch, and many of the placeholder players are blatant copy and paste jobs. A lot of faces are also strangely inferior to previous games, even going back to the previous generation. With Shaq and Kareem providing mo-cap, it may be a sign that greater attention will be paid to the retro content in NBA 2K19. If nothing else, we’ll likely be seeing some new post moves in the game, thanks to the two legendary Lakers.

Join us for Episode #250 of the NLSC Podcast later today where we’ll be discussing this, and other news from the past week. As always, feel free to share your thoughts in the comments section below.