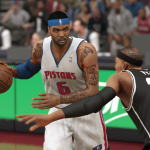 Parsec is changing the way our community connects with each other to play basketball video games. Our own Dee4Three has been leading the charge, connecting with several people to play games that no longer have online support, or never had it in the first place. He’s been sharing highlights from those games, including one in NBA 2K14 against Perdxdo.

The matchup features Dee using the Pistons, while Perdxdo took control of the Nets. It was a competitive game filled with big shots (including some from Mr. Big Shot himself, Chauncey Billups), spectacular dunks, crafty moves, and great defensive stops. Josh Smith, Brandon Jennings, Paul Pierce, Kevin Garnett, and Joe Johnson are also featured in the reel Dee put together. As I’m sure you’ll agree after seeing the highlights, it’s two people who know NBA 2K14 very well, making for a stimulating matchup that’s fun for the rest of us to watch.

If you’d like to connect with your fellow gamers on Parsec, check out this section of the Forum for more information! You may also want to jump into our Discord server if you haven’t already. For more basketball gaming video content, be sure to subscribe to the NLSC YouTube channel.