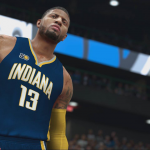 The latest trailer for NBA 2K17 spotlights the dynamic commentary in this year’s game. This year, Kevin Harlan and lead analyst Greg Anthony will be joined by a rotation of second analysts, including Chris Webber, Steve Smith, Brent Barry, Doris Burke, and Clark Kellogg. David Aldridge has also been added to the broadcast team, as he takes over sideline reporting duties. There will be eleven national broadcasters in total, with over 400 hours of new commentary.

Ernie Johnson, Kenny Smith, and Shaquille O’Neal return with their studio show, and will now conduct interviews with your MyPLAYER. The trailer also showcases some of the new dialogue recorded by real NBA coaches, and includes a few impressive highlights in the form of gameplay snippets. Check out the trailer below, or catch it here on YouTube if you can’t see the embedded video.

Additionally, the MyNBA2K17 app is now available for Android and iOS devices. At present, we can play MyTEAM Mobile and scan our faces, however we won’t be able to see the scans until The Prelude is released. Nevertheless, if you’d like to take a peek at how face scanning works this year, you can go ahead and install the app.

Got any thoughts on dynamic commentary in NBA 2K17, or impressions of MyNBA2K17 so far? Feel free to share them in the comments below, and join in all of the discussion that’s taking place in the NBA 2K17 section of the NLSC Forum.