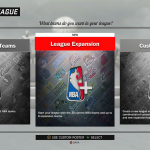 It was only in this week’s Monday Tip-Off that I was lamenting the quietness of this year’s preview season. As it turns out, news was indeed right around the corner, as exciting information on NBA 2K17 has been published over on the official NBA 2K Facebook page.

Senior Producer Erick Boenisch published a blog revealing that league expansion has been added to MyGM and MyLEAGUE in NBA 2K17. We will now have the option of beginning a new MyGM or MyLEAGUE game with the current league, a league with six expansion teams in addition to the current 30 franchises, or a completely custom league. Teams can be moved and re-branded, the same as in NBA 2K16.

The custom league option allows the inclusion of any combination of real NBA teams, new expansion teams, customised teams, Euroleague teams, and even the classic teams. NBA 2K17 will include some pre-configured custom art assets for the expansion teams, in case you don’t want to spend the time creating them all yourself. Additionally, community uploads will allow users to share assets that they make, so we’ll be able to save each other some time as well.

NBA 2K17’s league expansion options include a customisable Expansion Draft with player protections, a schedule creation tool, and more. The game also accounts for an increased number of teams in the lottery, recalculating the Draft odds accordingly. Expansion can also take place dynamically during the offseason, with MyLEAGUE naturally offering more control over the situation than in MyGM.

In other exciting news, the standalone Playoffs mode has returned. The option to start a new game from the current date in the season also returns, along with MyLEAGUE Online. There’s no word yet on what kind of features MyLEAGUE Online will include compared to its offline equivalent, but more details will surely be coming soon.

Finally, the menus have been redesigned this year, and will dynamically update in MyGM and MyLEAGUE to reflect changes that occur through league expansion. For more information, be sure to check out the blog on the official NBA 2K Facebook page. Got any thoughts on the news? Have your say in the comments section below, and join in the discussion here in our newly opened NBA 2K17 section. Also see below for a couple of menu screenshots. 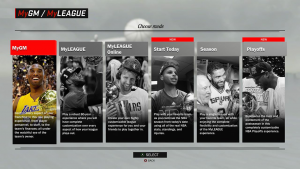 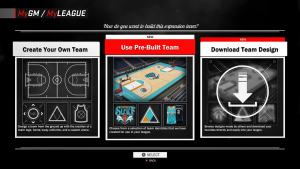 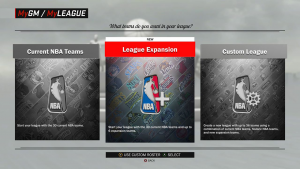