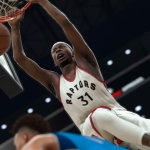 It’s the deep-dive developer blog that a lot of basketball gamers have been waiting for! Gameplay Director Mike Wang (aka Beluba) has posted a blog detailing the various improvements to gameplay in NBA 2K17, which you can check out here.

The blog touches on a lot of points that have been mentioned in recent previews, but in much greater detail. Beluba reiterates the aim of giving us more control over the action with the changes to shooting on the Pro Stick, but also mentions that we won’t be penalised for using the Shoot button. He also explains what the timing on layup attempts will mean for contact shots in heavy traffic, and the way that they have preserved realism with the new controls.

Beluba also explains NBA 2K17’s new Shot Meter, and confirms that green releases will not miss, as well as the ability to perform evasive layups with left and right movements of the Pro Stick. The Pro Stick can also be used to perform a dig steal on defense, and the stealing system takes into account more factors than it did before. He also discusses how blocks have been revamped and enhanced in NBA 2K17.

Signature Size-Ups have been broken down into small combos that can be chained together, for a better a one-to-one feel. A lot of work has also gone into making the animations smoother, from motion capture to blending techniques. Lots of new animations have been added, from off-ball collisions to putback dunks, and there is increased physicality between players. Beluba also drops a lot of information about the Adaptive Coaching Engine, enhancements to AI, and some other tidbits.

Be sure to check out the blog for all the details, and if you’ve got any thoughts, feel free to post them in the comments section below! You can also join in the discussion that’s taking place here in the NBA 2K17 section of the NLSC Forum.