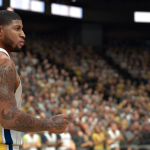 UPROXX’s Spencer Lund recently had a chance to talk to senior developer Rob Jones, as well as get his hands on NBA 2K17. You can check out his hands-on impressions of this year’s game from Visual Concepts here.

The article doesn’t provide much in the way of brand new information. It covers the goal of capturing Stephen Curry’s ability to knock down really long threes with regularity and the changes to the shooting mechanics, while emphasising the developer’s goal of giving gamers more control over the action. However, it does offer up some positive impressions of the controls in action, and seems to suggest that we won’t be getting stuck in animations as much in NBA 2K17. Additionally, the tweaked controls apparently aren’t as complex as they might seem:

This is all very smooth, though. Throughout Rob’s entire explanation, I kept mentioning how complicated this all sounded. Just playing basketball in real life, players are inundated with a multitude of variables they have to take into account before making their next decision with the ball or where they want to stand, even. But, even for a relative (at least to our readers) plebe at 2K, this increased player agency all fit into the flow of the game. You’re not second-guessing your on-court decisions as much as you might think. Even those who are new to the game.

Check out the article for more impressions, and feel free to have your say in the comments section below, as well as in this thread in the NBA 2K17 section of the NLSC Forum!