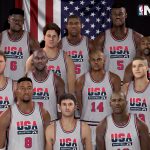 The first official teaser trailer for NBA 2K17 has finally been released. Titled “The Dream Lives On”, it spotlights Team USA 2016, as well as the pre-order exclusive 1992 Dream Team. The Star Spangled Banner accompanies clips of both teams during pre-game introductions and prior to tip-off, along with a few cinematic gameplay clips and celebration animations.

Notably, while Mike Krzyzewski is featured in the trailer, the late Chuck Daly is not shown on the sidelines for the Dream Team. Daly was also absent from the first official screenshots that were released whereas Coach K was included along with Team USA 2016. That would seem to confirm that Daly will not appear in NBA 2K17. Aside from that, all twelve members of the original Dream Team are accounted for.

The Australian Boomers will also be joining Team USA and the original Dream Team in NBA 2K17, along with other international squads that are yet to be announced. Check out the trailer below, or watch it here on YouTube if you can’t see the embedded video.

What are your thoughts on the teaser trailer? Will you be pre-ordering NBA 2K17 to play with the 1992 Dream Team? Have your say in the comments below, and join in the discussion here in the NLSC Forum.

If international teams are the biggest/ best new feature, I probably don’t buy the game. We had Team USA and the Dream Team all ready a few years ago….

I’m assuming they’ve done significantly more than that – we know for sure some additions have been made to MyGM and MyLEAGUE, if nothing else – but it’s time to start hearing about that stuff.

Player models look thin like in NBA Live 13. :)))
I’ve seen the trailer and not impressed. My option on today is don’t buy 2K and still waiting great Live 17 while playing in Live 16.