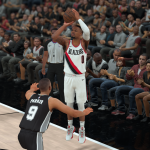 Patch 1.07 has been released for NBA 2K18. As of this post, it is available for the PlayStation 4 and Xbox One versions of the game, with the PC and Switch patches coming soon. The new update will be downloaded automatically as long as your system is connected to the Internet; if you encounter any issues, try restarting. I’ll update this bulletin as the other patches are released.

UPDATE: The latest patch is now available for the PC version as well.

The new patch addresses some technical problems, including an issue with the number of timeouts displayed on the scoreboard, incorrect VC earnings, glitches with Two-Way players in MyLEAGUE and MyGM, and game crashes. The custom t-shirt kiosk in The Neighborhood will also be reopening soon.

A few new art updates have also been pushed through with Patch 1.07. Some players have received new hairstyles, including Lonzo Ball, and the courts for the San Antonio Spurs and Portland Trail Blazers have been updated. Please see below for the complete patch notes.

You can also find a complete update history for NBA 2K18 here in our Wiki. Got any thoughts on the latest update? Have you noticed any other enhancements that aren’t mentioned in the notes? Have your say in the comments section below, and join in the discussion here in the NBA 2K18 section of the NLSC Forum.

Can I ask where can I download this patch for my pc ?

It will come through automatically through Steam. Note that we only support the Steam version in our community.