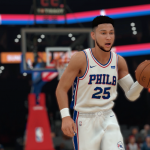 2K has released the second of two trailers for NBA 2K19 this week. The latest trailer previews the broadcasters and presentation in this year’s game, and includes several highlights from cinematic angles, along with snippets of gameplay. Not surprisingly, the game’s cover players – Giannis Antetokounmpo, LeBron James, and Ben Simmons – are heavily featured in the trailer.

The trailer confirms that Kobe Bryant and Kevin Garnett will be returning this year to provide guest commentary. Sportswriter Bill Simmons of The Ringer also joins the broadcast team this year as a guest commentator, with the trailer providing us with a preview of some of the remarks he’ll share during games. Behind the scenes footage of his recording session is also shown.

Watch the Broadcast Trailer below, or catch it here on YouTube.

What are your thoughts? Have your say in the comments section below, and join in the discussion here in our NBA 2K19 Forum!

I don’t interested in Simmons, but let’s embrace 2K to throw more money at cameos if they want. They would have got a correct NBA presentation package for more years ago, whether from the ABC or TNT channels + Barkley (as an expert and a player). I still thrilled our ESPN one. 🙂

It is strange that they’re not making the donation to the Retired Players Association to take Charles Barkley up on his offer, but are spending money on prominent actors for the MyCAREER story.