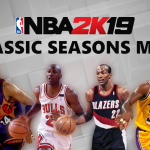 A couple of months ago, the Classic Seasons Mods for NBA 2K19 by Stildo33 and company were made available offline, in the wake of the game’s servers being shut down. At the time, the collection of fantastic retro mods covered the 1989 season through to the 1994 campaign.

As you may have recently seen announced in the Forum however, the 1988 season has now been added to the lineup! The 1994 roster is also in final beta, and now includes historical stats for all players. You can find the rosters for 1988 and all of the other seasons, as well as the required art packs, here in the NBA 2K19 Modding section.

Stildo33 and company aren’t done yet, either. A 1995 season roster is currently in the works, with a projected release in late October this year. Preliminary work has also begun on a 1987 roster, though it won’t be out until Thanksgiving at the earliest. Once again, a tremendous amount of work has gone into these rosters to ensure accuracy in both the aesthetics and on-court performance. If you’re still regularly playing NBA 2K19 PC – and even if you’re not – I’d highly recommend checking out the Classic Seasons Mods. Congratulations to the team on another great release!