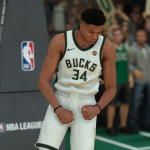 Patch 1.05 (also referred to as Patch 5) has come through for NBA 2K19. It’s currently available for PlayStation 4 and Xbox One, and will be downloaded automatically as long as your console is online. If it doesn’t, try restarting or checking for the update manually. The PC and Switch patches should be pushed through soon.

The latest update addresses a variety of issues across game modes. Some of the issues addressed include incorrect VC rewards for incentives in MyCAREER, a disconnection issue in Court Conquerors events, and a pause glitch in Triple Threat Online, among others. New functionality has also been added, including the ability to see the Heat Check cards currently available in MyTEAM packs. “Pulling the chair” in the post has also received improvements in terms of logic and visuals, and several unlisted adjustments and bug/stability fixes have been made game-wide.

Please see below for the full patch notes; I’ve also added them to the NBA 2K19 update history page in our Wiki. As always, feel free to share your thoughts on the latest patch in the comments section below, as well as in this topic in the NBA 2K19 section of the Forum. I’ll update this bulletin when the PC patch is pushed through.

Many other small bug fixes and adjustments were also made, game-wide.