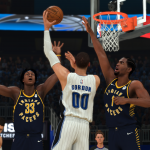 Patch 1.02 has come through for NBA 2K20 on PC, PlayStation 4 and Xbox One, and should be hitting the Nintendo Switch sometime soon. As with all official patches, it will come through automatically as long as you have an active Internet connection. If it doesn’t, try restarting your console or Steam client, or checking for the update manually.

There aren’t any detailed patch notes at this time, but Mike Wang has revealed that it features a slight stamina buff, and an increase to player speed in The Playground. Beluba has also noted that speed was boosted more than intended, and said that this will be addressed in another patch that’s coming soon.

I’ve created an article over in our Wiki to keep track of all the updates for NBA 2K20. I’ll be updating it throughout the year, but as always, any help in keeping it current and accurate would be most appreciated. In the meantime, feel free to share your thoughts on Patch 1.02 for NBA 2K20 in the comments section below, as well as join in the discussion here in the NLSC Forum. For those who missed it, I posted my initial impressions of the game in this week’s Monday Tip-Off, and will have a full review out soon.

They do it on purpose. So in the future If you buy it used and the servers are close, you can’t have a good game.

On this generation, the official patches still come through even after the servers are shut down. The rosters don’t, but the title updates come through the digital platform.

Fair enough. This doesn’t really have anything to do with Patch 1.02 for NBA 2K20, though.