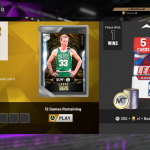 Patch 1.05 is now available for NBA 2K20. It will come through automatically for the PC, PlayStation 4, and Xbox One versions, as long as you have an active Internet connection. If you run into any issues, try restarting your console or Steam client, or checking for the update manually.

It’s a considerable update, weighing in at 626.8 MB on PC, 20.6 GB on PS4, and 35.8 GB on XB1. Unfortunately the patch notes aren’t very detailed, filing most of the changes under the heading of “Many, many more fixes included to improve the overall experience of NBA 2K20”. However, Mike Wang has provided some additional insights on Twitter regarding changes to the gameplay. In addition to addressing disconnection issues, Patch 1.05 for NBA 2K20 adjusts “full white” releases, buffs the Pick Dodger Badge, fixes baseline dunks that weren’t triggering properly, and widens the speed gap.

You can check out the official patch notes below, along with Beluba’s Tweets. I’ve also added that information to the update history for NBA 2K20 over in our Wiki. Feel free to share your thoughts on the update in the comments below, as well as join in the discussion here in the Forum.