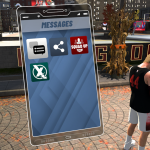 Patch 1.06 has come through for NBA 2K20. The patch is currently available for the PlayStation 4 and Xbox One versions of the game, and should hopefully be out on PC soon. As always, the update should download automatically as long as you have an active Internet connection. If you do encounter any difficulties, try restarting your console (or Steam client once the PC patch has been released).

The patch primarily addresses technical issues with The Neighborhood in MyCAREER, along with some other online glitches. The official patch notes are as follows:

Among the “many more fixes” are resolutions to blue screen errors on PS4, loading into MyCAREER with the wrong build, and other random crashes. Information on NBA 2K20 Patch 1.06 has been added to the game’s update history here in our Wiki. Feel free to share your impressions of the latest update in the comments section below, as well as join in the discussion here in the NLSC Forum. I’ll update this bulletin when PC patch is out.

UPDATE: As of October 16th, the PC patch is now available.