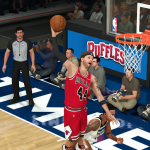 Patch 1.11 has come through for NBA 2K20 on PC, PlayStation 4, and Xbox One.. As always, the update should download automatically as long as you’re online. If it doesn’t, try restarting your console/Steam client, or checking for the update manually. The official patch notes are as follows:

Gamers have also noticed that the patch has introduced a new bug where timeout music will play during free throw attempts. At this time, there’s no word on whether a hotfix will be pushed through, though it seems likely we’ll get one at some point. Share your NBA 2K20 Patch 1.11 impressions in the comments below, as well as in this topic in the NLSC Forum! You can also find an update history for NBA 2K20 here in our Wiki.

NOTE: This bulletin has been updated to reflect the release of the PC patch, as well as the official patch notes.