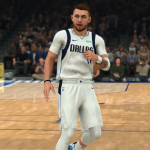 As sticky-fingers noted in our Forum, the servers for NBA 2K20 will be shutting down on December 31st, 2021. After this point, no online features and functionality will be available. This includes roster and Draft Class sharing, Play Now Online, MyTEAM, and MyCAREER and its connected modes.

Contrary to previous games that offered a lightweight version of MyCAREER in offline mode, MyCAREER in NBA 2K20 will no longer be available when the servers are shut down. It’s therefore advisable that you wrap up any business in MyCAREER before online support ends, from gaming to capturing video and screenshots for content creation. Naturally, the same goes for MyTEAM and other online modes.

It would also be a good idea to browse the shared files and download them while you still can. Obviously we’re able to distribute rosters the old fashioned way on PC, but PlayStation 4 and Xbox One gamers will have no way of sharing files after December 31st. Custom team art files in MyLEAGUE and MyGM will also be unavailable, and we’ll no longer be able to import our own images in-game as that requires online support.

To that point, feel free to share any suggestions of rosters and Draft Classes that you believe your fellow gamers will enjoy, and want to preserve. sticky-fingers has noted a few examples already, including Thunder Shaq’s rosters, PCBasket by Shuajota, the retro rosters by RMJH, and some other major projects.

For those who are unaware, 2K increased online support for all of their titles from 18 to 27 months back in 2015, following the controversy with NBA 2K14. This means we can expect the servers for NBA 2K21 and NBA 2K22 to be shut down over the next couple of years. Needless to say, we’ve still got ample time in that regard, but keep those impending server shutdowns in mind if you’re sticking with an older title. Thanks to sticky-fingers for the reminder regarding the shutdown, and the suggested downloads so far!

NBA Live 2001 enthusiasts Nate and Roger join us for an in-depth chat about their beloved game, which they’ve been regularly playing for over 20 years now! We also chat about other old favourites and retro basketball gaming in general, and reminisce about the NBA players that we grew up watching.