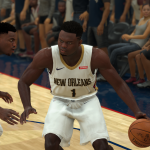 Since the announcement trailer has dropped, there’s been a lot of speculation that Zion Williamson will appear on the NBA 2K21 cover. Many gamers have also suggested that the late Kobe Bryant will appear on the Legend Edition cover, which seems like a solid guess given the circumstances.

There have been hints of other news coming through next week as well. My guess is that we’ll also learn some of the pre-order bonuses and possibly be able to pre-order the game as soon as next week, though there’s a chance we might receive some more substantial details. I’ll be sure to post any information as soon as I can.

In the meantime, feel free to speculate on the NBA 2K21 cover players in the comments below, as well as join in the discussion taking place here in the NLSC Forum! Once again, if you’d like to help keep our Wiki resources on NBA 2K21 updated throughout the preview season, you can find the article for the game here.

Vinsanity officially ended his career so time for your move 2k to put him on a Legend Edition (I understand that Kobe died, but he already had his Legend cover). Alternatively it could be Dirk or David Stern.

Last edited 6 months ago by Pep

My guess is Zion Williamson for Standard, Vince Carter for Legend Edition, and a special Kobe Bryant edition (a “super legend”/definitive edition, if you will).