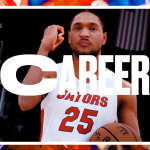 After the official Twitter account dropped a not-too-subtle hint yesterday, the current gen trailer for NBA 2K21 has been released. In addition to giving us a glimpse at the gameplay from cinematic angles – along with a clip showing off the new shot meter – it also teases some interesting details.

It appears as though this year’s MyCAREER story will once include a college portion, as a player can be glimpsed wearing a Florida Gators jersey. Previous leaks have hinted at college teams being playable in NBA 2K21, though the full extent of their presence is obviously yet to be confirmed. The Neighborhood appears to have been revamped, based on a quick glimpse and a sign mentioning “2K Beach”. Players from around the world are also spotlighted, possibly hinting at some related content.

Check out the trailer below, courtesy of TGsoGood.

With the game less than a month away from release, we should be getting some concrete details very soon. In the meantime, what are your thoughts on the NBA 2K21 Current Gen trailer? What do you make of the hints that it appears to have dropped? Have your say in the comments below, and join in the discussion here in the NLSC Forum!