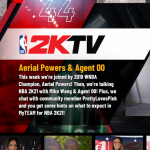 The current gen version of NBA 2K21 is a little over a month away from launch, which means the trickle of information about the upcoming game should soon become a steady stream. Earlier this week the game’s soundtrack was unveiled, and now thanks to NBA 2KTV, we have some tidbits on gameplay and MyTEAM.

Agent 00 had the opportunity to interview Mike Wang in the latest episode of NBA 2KTV, and Beluba had some interesting things to say. He stressed that one of the main goals this year is to ensure that the game is enjoyable, striking the right balance between realism and fun. Beluba cited canned turnovers on cherry-picking passes as an example of something they wanted to fix.

He also mentioned that movement will feel very different on Next Gen, and confirmed that different studios are working on the Current Gen and Next Gen versions. The PlayStation 5 and Xbox Series X version will also reportedly have everything that the Current Gen version does, “but so much more”, indicating it’ll be deeper than NBA 2K14 on PS4 and X1. There will also be more WNBA content this year.

As for MyTEAM, Evolution cards will return in NBA 2K21, with more control over how we evolve them. MyTEAM Unlimited will also return, with “new ways to compete”. We’ll also be playing for “championship rings”, the in-game context of which is yet to be explained. As previously confirmed, progression in Current Gen MyTEAM will carry over to Next Gen.

More information and previews of NBA 2K21 should be right around the corner, so stay tuned. In the meantime, you can check out Agent’s interview in the latest NBA 2KTV episode. We’ll share our thoughts in this week’s NLSC Podcast, but for now, have your say in the comments below, and join in the discussion here in the Forum. Thanks to yyy2k from the official NBA 2K subreddit for compiling these tidbits!