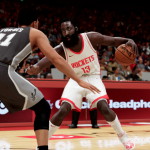 The first gameplay blog for NBA 2K21 Next Gen has been posted, and it’s all about the fundamentals. It discusses the basics of shooting, dribbling, and passing in NBA 2K21. As noted when the Next Gen trailer dropped, further blogs will go into detail about AI, physics, and other aspects of gameplay.

I’ve provided a concise summary of the NBA 2K21 Next Gen gameplay blog below, but some of the key points it touches upon include the ability to control short arcs and bank shots with the Pro Stick, a more readable shot meter, touch around the rim, and jumpers off the dribble. It also mentions foot positioning around the three-point line, new signature dribbles, different dribbling speeds, and reworked passing.

It’s definitely worth checking out the NBA 2K21 Next Gen gameplay blog in full, but once again if you’d like a concise breakdown, check out my summary below. Got any thoughts? Feel free to share them in the comments, and join in the discussion here in the Forum!