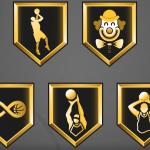 Some of the key points spotlighted in the blog include the new MyPLAYER Builder, which has done away with pie charts. There are also new Badges including a Mamba Mentality Badge, and 24 Takeover abilities. Several updates have also been made to the AI in the Next Gen version of NBA 2K21. The version of the blog posted on the official PlayStation website also mentions another PlayStation 5 exclusive, this time concerning MyTEAM.

As with the previous insights, I recommend reading the third NBA 2K21 Next Gen gameplay blog for the full scoop. However, you can check out my summary of the key points below. Feel free to share your thoughts in the comments, and join in the discussion taking place here in the Forum!