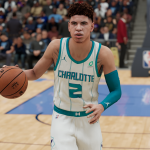 In addition to the update for Current Gen, the Next Gen version of NBA 2K21 has received Patch 1.05. It should download automatically as long as your PlayStation 5 or Xbox Series X/S is online. If it doesn’t, try restarting your console, or check for updates manually.

The patch includes 24 player likeness updates, court and home jersey updates for the Los Angeles Lakers, and a City jersey update for the New York Knicks. The effectiveness of fading three-pointers off the dribble has also been reduced, per community feedback. Various fixes have also been made in MyNBA, MyTEAM, and MyCAREER/The City. More songs have also been added to the soundtrack.

For a full breakdown of Patch 1.05 for NBA 2K21 Next Gen, please see below for the patch notes. You can also find a complete update history here in our Wiki. Feel free to share any thoughts in the comments, as well as join in the discussion here in the NBA 2K21 section of our Forum.