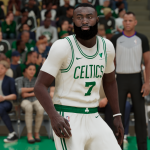 Patch 1.06 is now available for the Next Gen version of NBA 2K21. As always, it should come through automatically as long as your PlayStation 5 or Xbox Series X/S is online. If it doesn’t, try restarting your console, or checking for updates manually.

The patch is smaller than the previous update, primarily consisting of likeness updates for 30 current and retro players. It also resolves a few technical issues in MyTEAM, and prepares the mode for Season 6, which is set to tip off in about eight days. To that end, the patch notes hint at Season 6 in MyTEAM having an unusual theme. A Spring theme has also been added to The City, and it will be going live shortly.

Check out all of the notes for Patch 1.06 below, and find a complete update history for NBA 2K21 Next Gen here in our Wiki. Feel free to chime in with your impressions in the comments below, as well as join in the discussion here in the Forum.