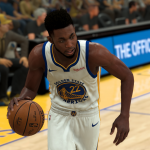 Patch 1.02 has been released for NBA 2K21. It is currently available for PlayStation 4 and Xbox One, and will be available for PC and other platforms soon. As with previous official patches, it will come through automatically as long as you’re online. If you encounter any problems, try restarting your console or Steam client.

The patch adds a first boot option for Pro Stick Aiming/Shot Timing, which is also available under settings if you wish to change it later. Shot Aiming can now also be used when the Shot Meter is off, and the speed at which the Pro Stick is deflected now determines the Ideal Shot Aiming (left for a slow flick, right for a fast flick). Standing dunks using the Pro Stick have also been tuned for increased reliability, Park dribbles have been re-mapped to “holds” on the Pro Stick, and a few animations have been cleaned up, among other gameplay adjustments.

Other enhancements in Patch 1.02 for NBA 2K21 include a face update for Andrew Wiggins, as well as fixes for hangs and other issues in MyCAREER and MyTEAM. 2K Share has also now been enabled. Check out the full patch notes below, as well as here in the Forum. A complete update history for NBA 2K21 will also be maintained here in our Wiki.