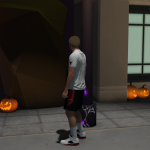 Patch 1.04 has been released for NBA 2K21 on PC, PlayStation 4, and Xbox One. As always, the update will come through automatically as long as you’re online. If it doesn’t, try restarting your console or Steam client, or checking for updates manually.

The new update brings Halloween to The Neighborhood in MyCAREER. It also includes new faces for over 60 NBA and WNBA players, updates the default Quick Play matchup to Lakers vs. Heat, and prepares the game for upcoming 2K Beach events, Season 2 in MyTEAM, and the $250K MyTEAM Unlimited tournament.

Other fixes include adjustments to set screen movement, and changes to shot aiming to combat modded controller exploits. Park dribble moves now also require the Hall of Fame Tight Handles Badge, and some technical issues have been resolved. Please see below for the full notes for NBA 2K21 Patch 1.04; you can also find a complete update history for the game here in our Wiki.

Many more fixes included to improve the overall experience of NBA 2K21 across all game modes.