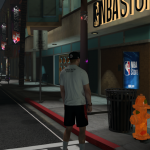 Patch 1.05 has come through for the PC, PlayStation 4, and Xbox One versions of NBA 2K21. As with previous updates, it should come through automatically as long as you have an active Internet connection. If it doesn’t, try restarting your console or Steam client.

The patch adds Fall decorations to The Neighborhood, and includes likeness updates for around 80 current NBA players, WNBA players, and historical players. It also adds Statement uniforms and a new Nuggets court, fixes some technical issues across MyCAREER, MyTEAM, and MyLEAGUE/MyGM, and updated the record books with 2020 season results.

Please see below for the full patch notes. You can also find a complete update history for NBA 2K21 here in our Wiki. Add your thoughts on Patch 1.05 for NBA 2K21 Current Gen in the comments below, or join in the discussion here in our Forum.

Many more fixes included to improve the overall experience of NBA 2K21 across all game modes.