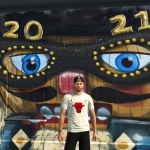 Patch 1.07 has come through for the Current Gen version of NBA 2K21. It’s currently available on PlayStation 4 and Xbox One, and should be coming through on PC soon. As always, the patch should download automatically. If it doesn’t, try restarting your console or Steam client, or checking for updates manually.

Unfortunately there are no patch notes as of writing; if any are provided, I’ll be sure to add them. Users over on Reddit have identified several player likeness updates however, as well as new courts. The Neighborhood decorations in MyCAREER have also been updated for the New Year. Based on the notes from Patch 1.06, it’s unlikely that there were many other significant changes.

If you do notice any other changes following Patch 1.07 for NBA 2K21, let me know in the comments, or in the official discussion topic in our Forum. I’ve also updated the patch history for NBA 2K21 Current Gen in our Wiki, with what information we have so far. Credit goes out to ljfabs and others users on Reddit for the list of likeness and court updates, which you can find below.

January 11th Update: The patch is now available for PC as well.

City Edition courts have also been added for Miami and Charlotte.