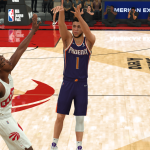 Patch 1.9 is now available for NBA 2K22 Current Gen, specifically the PlayStation 4 and Xbox One versions. The PC patch should also come through shortly. As always, the latest update will be downloaded automatically as long as you’re online. If you encounter any problems, try restarting your console or Steam client, or checking for updates manually.

The new patch prepares NBA 2K22 for Season 4 in MyTEAM and MyCAREER, which will be tipping off this Friday. It also includes likeness updates for NBA, WNBA, and historical players, as well as some stability fixes for MyCAREER and The Neighborhood. The patch has also made a notable change to the way that interceptions work. Users are now required to press the Steal button in order to successfully intercept a pass.

You can find the full notes for Patch 1.9 below, as well as in our update history for NBA 2K22 Current Gen. Feel free to share any thoughts in the comments, as well as join in the discussion here in the Forum.