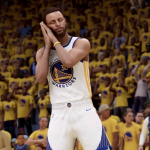 The NBA 2K23 First Look Trailer has been released, giving us our first official glimpse of the game in action. All gameplay footage has been taken from the Next Gen (PlayStation 5 and Xbox Series X|S) version of NBA 2K23. In case you missed it, the PC version has been confirmed to be a Current/Last Gen port once again.

As is always the case with these trailers, gameplay is featured in quick clips from cinematic angles. In addition to featuring active stars doing their thing, the trailer also spotlights some new reactions and celebrations, including Steph Curry’s “Go to Sleep” gesture. The Jabbawockeez will also be performing in NBA 2K23.

What are your thoughts on the NBA 2K23 First Look Trailer? Have your say in the comments below, as well as join in the discussion here in the Forum! As per the official NBA 2K Twitter, more details on gameplay will be coming next week. A previous Tweet outlined 2K’s plans for August, which include revealing details on the revamped Jordan Challenge, as well as MyNBA, MyTEAM, MyCAREER, The City, and more. We can always expect a very condensed preview season these days, but in any event, it should be in full swing next week.