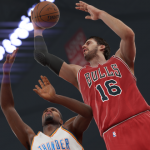 As previously teased, this week’s episode of NBA 2KTV Postseason has provided us with some details on NBA 2K16. After re-capping the announcement of the release date and pre-order bonuses, Rachel “crashes” the development team’s headquarters to chat to Scott O’Gallagher. Scott talks about watching the Playoffs, liaising with players and coaches, and meeting with his engineer to work on implementing realistic strategies in the AI.

Notably, three new retro teams have been confirmed at this juncture: the 2000 Toronto Raptors featuring Vince Carter and Tracy McGrady, the 2008 NBA Champion Boston Celtics, and the 2001 NBA Champion Los Angeles Lakers, who went 15-1 in the postseason that year. From the sounds of it, a few more new retro teams may be revealed in time.

Rachel also chats to Rob Jones about the shoes. Shoes in NBA 2K16 will be 3D scanned, and 2K are working on getting some additional brands and signature shoes into the game. Meanwhile, Asif Chaudhri talks about improvements to the crowd, which includes brand new animations this year.

Mike Wang also makes an appearance, offering up some information on player movement and animations, and the goal of achieving authenticity. Mike mentions they’re working on “something big” that they’re not ready to talk about yet, but they’re expecting it to make NBA 2K16 look better than any previous basketball game. You can also catch a glimpse of a few work-in-progress animations in the background. Finally, we got a new Locker Code for NBA 2K15 (#2K16NEWSon2KTV), for those interested in another freebie.

What do you think of the details that have been revealed so far? Sound off in the comments section below, and join in the discussion here in the Forum! If you’d like to catch the episode yourself, you can watch it in the PC, PlayStation 4, and Xbox One versions of NBA 2K15, or embedded below.

I think that Raptors team is a nice touch.

I think all of the Bulls teams that I’d like to see represented have been included at one point, and most of them will probably make the cut as long as they’ve got the likeness rights for Michael Jordan and Scottie Pippen.