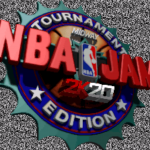 Following on from the release of the Double Z Mod, eskayelle has released a beta version of NBA Jam TE 2K20! The mod for the Super Nintendo version of NBA Jam Tournament Edition features updated rosters with 169 players, including some bonus players on their former teams in the vein of the NBA Playgrounds series.

Not only does the mod add new players with appropriate ratings, but also updated team logos and court colours. Since the game only includes 27 NBA teams, the Rookies squad includes players from the Toronto Raptors, Memphis Grizzlies, and New Orleans Pelicans. The Seattle SuperSonics have also been replaced by the Oklahoma City Thunder.

As noted, NBA Jam TE 2K20 is currently in open beta, so expect further changes as players start moving around during the offseason. Download it here, and check out this topic in the NLSC Forum for further previews and information!