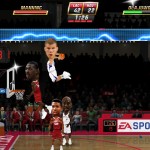 To be honest, it’s pretty fun. It’s familiar and not particularly groundbreaking, but if you’re a fan of NBA Jam then all the usual appeal is there. The high flying dunks, catching fire, Tim Kitzrow’s commentary…you can expect all that goodness. Although it’s an update to the 2010 reboot and not a port of On Fire Edition, the rosters have been updated as of the 2012 season, so you’ll see Carmelo Anthony in New York and Chris Paul on the Clippers.

The touchscreen controls are fairly intuitive and easy enough to master, though not as fun as using an Xbox 360 or PlayStation 3 controller. To that end, I would suggest that if you’re playing the game on a mobile device instead of a console, you’re really not getting the premier NBA Jam experience. Having said that, the controls are fairly responsive and the game is certainly very playable.

I personally prefer the “Arcade” control setting, featuring directional control on the bottom left of the screen and action buttons on the bottom right, as opposed to the “Gesture” controls which again places the d-pad on the left of the screen but involves moving your finger up, left, right and down on the right side of the screen to shoot, pass, steal, shove or activate turbo. Performing spins and crossovers by shaking the device is a nifty idea, though a bit awkward and distracting. Being a port of the 2010 game rather than On Fire Edition also means that it lacks OFE’s tech, notably Real AI. As such, the game can get kind of repetitive and doesn’t feel quite as smooth, two of the major improvements that On Fire Edition brought to the franchise last year. If you’ve played OFE then this might feel like a bit of a step back, but it’s still a very satisfactory experience for a $5 mobile game.

It also means that NBA Jam for Android has Campaign mode instead of On Fire Edition’s Road Trip, which was another huge improvement in last year’s release. Campaign mode isn’t terrible or anything but once again it can get very repetitive, and must be played through at least six times to unlock all of the bonus content that’s available through the Jam Challenges. Again, this is certainly more than acceptable for a mobile version of the game, but if you want the best NBA Jam experience that’s out there, you’ll need to get On Fire Edition on the Xbox 360 or PlayStation 3.

It looks and sounds great for a mobile game though, so on the whole it’s a very good port. There are a couple of weird and glitchy animations when the ball goes through the hoop on certain dunks but overall it doesn’t take too much away from the experience. Tim Kitzrow’s commentary is clear and sounds as good as ever, though the music stops abruptly on the halftime screen, which is a bit jarring. Although the rosters have been updated, some teams are still a bit lacking as they only include two current NBA players. This isn’t too much of an issue though, as the game does not allow for any substitutions between quarters anyway and each team’s lineup should provide enough tools for the player to get the job done, one way or another. There is still a healthy amount of special characters and legends in the game too, including Scottie Pippen, Dennis Rodman, Karl Malone, John Stockton, Patrick Ewing, John Starks, Hakeem Olajuwon and of course, Magic Johnson and Larry Bird.

The game also supports local multiplayer via WiFi and Bluetooth. I haven’t been able to try that out as yet but it’s definitely cool to have that functionality, especially as the lack of Real AI and the lengthy Campaign mode can make the single player game a little tedious after a while.

Overall, NBA Jam for Android is a good, fun game, a commendable mobile port of the console version. For the best NBA Jam experience you’ll still have to look to the consoles but if you’re looking for a basketball game to play on your Android mobile or tablet, something that’ll pass the time on long trips or give you a quick gaming fix, it’s a great buy at $5. Now, if only we could get the latest NBA Jam games on PC via Steam…