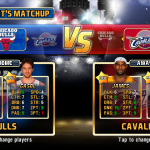 The Android version of NBA Jam has received a new roster update for the 2014/2015 season. A couple of rookies have been added and players have been moved to their new teams (LeBron James is on the Cleveland Cavaliers, Paul Pierce is on the Washington Wizards, and Pau Gasol is on the Chicago Bulls, to name a few), but Andray Blatche still appears on the Brooklyn Nets’ roster, and recent moves such as the Rajon Rondo trade and the Houston Rockets’ signing of Josh Smith aren’t included.

New audio updates are also included, as long-time NBA Jam announcer Tim Kitzrow now announces the names of the New Orleans Pelicans, Brooklyn Nets, and Charlotte Hornets. In the previous update, the newly renamed Nets and Pelicans were announced in a different voice, but Kitrow has obviously been brought back into the booth to provide the new audio this time around. Team logos have also been updated, though the Phoenix Suns still have their old logo.

Once again, it doesn’t appear as though the iOS version of the game has been updated. You can check out my review of NBA Jam on Android here, and discuss the game in The Virtual Hardwood section of the NLSC Forum.