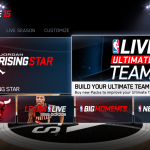 EA Sports has announced that the NBA Live 15 servers will be shut down as of December 1st, 2019. In a post over on Reddit, the Dev Team wrote:

Online support for NBA Live 14 just ended on the first of this month, following an announcement back in June. If you have any unfinished business with online modes such as Ultimate Team, or if you’re a content creator who needs screenshots and footage, I’d suggest getting on that ASAP.

It’s interesting that the NBA Live 15 servers are being shut down so soon after NBA Live 14, and with less notice. EA’s online support for those older releases has already extended far longer than usual however, and it’s highly unlikely that there are enough gamers still playing NBA Live 15 regularly enough to justify the use of those resources.

With the cancellation of NBA Live 20, it remains to be seen when EA will pull the plug on the NBA Live 16 servers. I would assume that the servers for NBA Live 18 and NBA Live 19 will remain active for some time yet, especially with the series currently on another hiatus. I’ll be sure to post any further information as it’s made available, but in the meantime, feel free to add your thoughts in the comments section below, as well as take the discussion to the NLSC Forum.

They’ve left them up a long time, much longer than usual this generation.

Just fired up the “Irving” disc. Apparently, these small 8–9 in-game updates are no longer there to re-download. Played the Bulls vs the Grizzlies 5 min. Not bad, if there were no choice, I’d play it more! Liked that «Wired» segment with a coach saying within) I’d like to extract that “Poker Face” by Lady Gaga remix too! Live 14 was my only game back then, so I had to play it on X1)

I had only the EA Access Live 15, and my 10 hours in-there ended while the game was removed from the vault. I believe these in-game patches you have to download as cache frees up are not going to be provided for it too.

Pretty much. Once the server is down, nothing is going to come through. That’s kind of a problem with last gen 2K on console. If you missed the final roster update, you’re out of luck now.